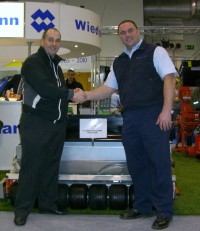 When Stuart Hogg, Course Manager at St Anne's Old Links GC, Lancashire was tipped off about brand new kit in the pipeline for 2010 he was happy to be among the first in the country to try it.

Commercials sales specialist, Darren Barker from Balmers Garden Machinery knew his client coveted an overseeder with a difference. In the summer at Wiedenmann's German HQ where new products were unveiled for the year ahead, the Burnley dealer saw a new aerator and overseeder unit - the Terra Float and Terra Seed - which he considered highly appropriate for his Fylde coast client.

"Darren knows his stuff. I had no hesitation looking at the Wiedenmann - their reputation for aeration equipment is first rate," said Stuart Hogg.

The new machines are part of ever-growing Wiedenmann's turf conditioning range. The Terra Float is a spiked aerifier with a three piece floating ground-driven roller which cleverly through surface compaction and thatch layers without distressing the playing surface. The Terra Seed can either be bought as a stand alone seeder or work in partnership with the versatile Terra Float.

So Darren, together with Mike James, Wiedenmann's Northern Sales Manager, brought the spiking seeder for trial - and got instant approval!

"There were lots of reasons for liking them. The flexible three part roller on the Terra Float responds well when you've got lots of hills to go up and down. The floating aspect means it is especially suited to undulating ground. We'll use it all over, and definitely on the greens and apron surrounds. The beauty of it is that it can get into all the nooks and crannies with its 1.6m width," Stuart Hogg continued.

The Terra Float provides a remarkably dense hole pattern, perfect for the Terra Seed following on close behind, scattering seed thoroughly. Both machines embody the best of traditional overseeding techniques giving optimal contact between new seed and soil with the end result a natural finish with an impressive germination rate.


"We'll be using the Terra Seed largely on fescue grass, getting among the sward of existing plants. We can take it onto weaker areas or anywhere that needs a minor repair. The machine came with three options… 5mm, 8mm or star shaped tines. We chose to prepare our seed bed with the star shaped tines. A bonus for us is that there's only 140 mm drop between the seed discharge opening and the soil. Very few seeds can 'blow away' so the rate of successful seeding is maximised - ideal for our links course, and its westerly wind!" Stuart Hogg mused.

St Anne's Old Links, situated between St Anne's and Blackpool, has already been declared as the only Fylde course hosting the final round of qualifying for the 2012 Open. Stuart Hogg took up his post at the Lancashire club in June 2004 where he heads a team of six after spells at two other links courses, Fortrose & Rosemarkie GC on the Black Isle and West Kilbride GC at Seamill in Ayrshire.