0 Land of the Midnight Sun Iceland

I was lucky enough to be invited out to speak in Iceland. Along with Eddie Adams the Head Greenkeeper of the Old Course St Andrews. I took along my wife Amanda as we were to be there for 5 days. 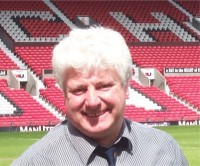 I had never been to Iceland before and did not really know much about the country. I did buy a book so as not to be ignorant and I learnt as much as I could before going out.

The speeches were in an hotel on the Thursday afternoon. They were very well attended and I felt they both went very well. I had never met Eddie before and soon found out he was a very interesting speaker. The Old course at St Andrews is certainly a wonderful golf course, the history and the way it is run is an education in itself. A really informative speech indeed.

The people are sport mad. I went to 3 football games while there and although not big crowds the atmosphere was very friendly and the fans knew what they wanted. A lot of the crowd were made up of young children, they seemed to be a big part of the whole occasion. The biggest game I went to was only watched by perhaps 2,000 people but the enthusiasm was there for all to see.

I met and spoke with a lot of Icelandic Groundsmen and green keepers who like us all complain of too much play on their pitches.

The pitches were in a varying condition, from well worn to really well grassed. I asked about grass seed and it seemed that our rye grasses did not survive the winter to well and the seed mix that I saw had some Supra poa supina in it. I remember that I myself tried this in my re-turf of 1998 and had found that although it is a hungry fast growing grass it did not recover so fast after games like a rye would.

The most amazing thing for us was the hours of daylight. It just never got dark. The sun set at 1am! . Of course in the pursuit of research Eddie and I did stay out on a number of occasions at watering holes and did monitor the situation!!! All this light had a really good effect on the grass, it would be growing in the light and the temperatures were not to bad either in the daytime or over night. ( Not that you would know it was night) While we were there the temperatures ranged from 19c down to 9c.

The biggest problem that the Groundsmen have is the cool wind that seems to be blowing most days. To germinate seed it is a problem because it never really gets warm enough to establish itself. Everyone I spoke to spoke of the wind chill factor and the adverse effect on the grass.

It was amazing to be sat at a football game at 9pm with bright sunshine in your eyes? It was even more amazing to go onto a golf course to meet up with Eddie after the game and to see people making their way out for a game of golf at 10 -30pm at night! To think we say our courses are getting over used?

It does have a down side though. We were told that on the shortest day they only see 4 hours light if they are lucky! Like ourselves the light fades as autumn and then winter comes on. It is hard to imagine going to work here in England and it hardly ever getting light. I moan and groan about Old Trafford being dark but at least there are a few hours of light. At least their football season is finished so the pitches are not being played on.

It would take some getting used to having a winter of darkness having had a summer of none stop light.

The people were really nice. They all live for the summer and make the most of it. You can see children who might well need to be in bed but are still playing out because it is to light to go to sleep. They all seem very well behaved and the summer is a wonderful time for everyone on the island.

The government pay all school children above the age of 14 to do like a community scheme job. They do the grass verges and flower beds for £2 an hour. As you drive around the students are all working at a leisurely pace but the results are amazing.

We were treated like royalty and looked after at all times. We traveled about the island and were met with a cheery smile and a firm handshake. I would recommend a visit if you are ever looking for something out of the ordinary. There is so much to see and so much to do. The landscape is very harsh with out any trees apart from the capital itself.

A word of warning though, the food and drink is very expensive with a pint being around £4 !

So all in all a very well worth while visit. I really enjoyed it and would certainly go again……..must work on my golf though, Eddie carried me!