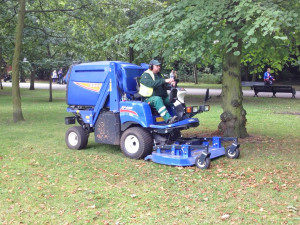 The first purchase of the recently-launched Iseki SF450 out front cut and collect rotary mower has gone to The Landscape Group and one of its first jobs was to prepare the events lawn at the Queen Elizabeth Olympic Park for the Prince Harry-inspired Invictus Games.

This follows The Landscape Group's appointment as grounds maintenance legacy partner for the Queen Elizabeth Olympic Park, where it is contracted to care for its blue and green estates until at least 2024.

The mower, delivered by local Ransomes Jacobsen dealer, Ernest Doe & Sons, will be employed at both the Olympic Park in East London and Regent's Park in Central London.

Commenting on the new machine, Angus Lindsay, Group Head of Assets and Fleet said, "For several years now we have been looking for a robust, high capacity ride-on rotary collector mower. Many of these types of machines have been based on traditional out-front units retro-fitted with collectors, which makes them unwieldy and with impellers mounted on the deck or side of the machine, overly wide for transport and/or access.

"We have trialled and indeed purchased several very good machines from other manufacturers, but have found nothing to match the performance of the Iseki SF450 when it comes to being able to clear large areas in a short period of time.

"This, our first SF450, will operate between the Queen Elizabeth Olympic Park in East London and The Regent's Park in central London where it will be used to cut/collect events lawns, large areas of parkland, play areas and during the Autumn it will be used for leaf collection.

"Initially trialled at The Regent's Park, the operators were bowled over by its comfort, low noise levels, operating platform and overall performance, which ticked many boxes for me as a happy operator leads to good productivity; this was reinforced when it was first used at Queen Elizabeth Olympic Park to prepare the events lawns for the Invictus Games where the operator George Gibbons said it was one of the best machines he's ever used!"

Richard Tyrrell, Ransomes Jacobsen's Product Manager for Iseki products added, "With its permanent 4-wheel drive, high mow speed, wide mower deck and a large capacity collector, we're convinced that the SF450 is more efficient than its main competitors. Operator comfort and high end ergonomics are built into Iseki products and the SF450 is no different. With its enhanced productivity and reduced cost of ownership we are confident it will be a mower of choice for groundscare and landscape contractors."