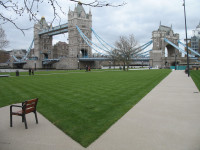 Landscapers are raving about Barenbrug's revolutionary RTF turf because it's so tough and versatile. The Rhizomatous Tall Fescue is also tolerant of waterlogging, drought and shade, so it will grow and survive where other turf can't.

David Hollick, owner of Seasons Landscapes Ltd, specialises in residential garden design and construction in South East London and Oxfordshire. He started using RTF turf for his installation projects about a year ago and the results, he says, have been fantastic. "This is very high quality turf. It establishes fast, the density of the sward is superb, it's hard-wearing, tolerates drought well and grows even in shady areas, where we've had problems growing turf in the past."

David sources his RTF from accredited RTF turf producer Tillers Turf, in Lincolnshire. "I have a very good relationship with Tillers Turf. The RTF turf is well grown, well cut, uniform in thickness and easy to lay."

Last year's long hot summer was perhaps the toughest test for any turf, but the RTF David laid proved tougher than most. "The RTF I put down about a year ago survived the drought, even in areas where there were hosepipe bans. And the recovery of the turf after the dry spell was very good - I didn't have to replace any at all."

David has also purchased Barenbrug's BAR 10 with RTF new grass seed mixture, which he is currently trialling on roadside verges on a private estate.

Landscape design and build specialists ISS Waterers Landscape, based in Surrey, has been using RTF turf for two and a half years and found it perfect for areas where other types of turf would struggle to survive. Project manager David Milloy says: "We recently used RTF turf on a couple of projects to solve specific problems. In Virginia Water we laid 500m2 of turf in a residential garden where there was restricted light from overhanging tree canopies, and no irrigation system installed. We chose RTF because we know it tackles shade and dry conditions better than traditional turf. It's looking great and early signs are very positive.

"At another project, in Windlesham, Surrey, we installed 1,500m2 of turf in a garden which was being used by a lot of children, so we used RTF because of its hard wearing properties. Again, they had overhanging trees, so shade tolerance was an issue." 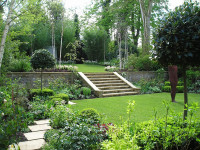 David buys his turf from In Turf, near York. "I've used them for years," he says, "and they are a professional company which supplies very high quality turf."

ISS also undertakes commercial work and has used RTF turf for a very specific application at the Bath Spa Hotel. "Our task was to lay turf underneath the canopy of a very large, mature beech tree which dominates the grounds of the hotel," explains David. "Grass struggles to grow under the canopy, because it lets in so little light. Originally traditional turf was proposed for the project, but after considering the options we decided to use RTF turf to increase the chances of survival in these conditions. The turf was laid two months prior to the hotel reopening after refurbishment and it looked fantastic for the event.

"RTF turf has given us the flexibility to provide our customers with long-lasting, tough grass in quite challenging growing conditions. It really is a great all-round solution."

Some 3,500m2 of RTF turf was also used as part of a £3 million project to renovate Potters Field Park, located on the south bank of the River Thames, in London. The turf was used in a reinforced turf system that blends thousands of interlocking plastic mesh elements into a specially prepared rootzone.

Barenbrug has seen a dramatic increase in sales of its BAR 10 since including RTF for the first time this year. Paul Johnson, Barenbrug managing director, said: "BAR 10 has always been a popular mixture for groundsmen and greenkeepers looking for a mixture that has the ability to survive in waterlogging or drought conditions. With the addition of RTF these attributes are strengthened even further."

RTF's drought-busting attributes were recognised recently when it was awarded the Waterwise Marque. This accolade recognises RTF's water efficiency qualities.

A domestic project, completed by ISS Waterers, where RTF turf was used.

3,500m2 of RTF turf was used as part of a £3 million project to renovate Potters Field Park, on the south bank of the River Thames.