An outbreak of Ramorum disease in larch trees has been confirmed in private woodlands north of Newton Stewart.

The fungus like disease was discovered after a recent aerial survey of the west of Scotland.

This outbreak is the third on Japanese larch in Scotland, the first two being found earlier this year on the Craignish peninsula and on the island of Mull.

On larch trees, the disease first causes crown and branch dieback with retained dead needles and resinous lesions. Tree needles wilt, turn grey or blackish before dying. Tree death can follow within a matter of months. The only way to contain the disease is to fell the area and surrounding trees and host plants.

"The area affected currently appears to be some 15- 20 hectares in size and we are working with the land managers to confirm the extent of the infections and the measures required to deal with them.

"It is unclear at this stage how the disease arrived here but our site investigations may help provide the necessary clues. The spread of the disease is a serious concern to those in the forestry sector and we need to continue to monitor the situation very closely.

"The relevant forestry associations have been informed and we ask woodland owners to remain vigilant and to report any suspected signs of tree disease to the Commission." 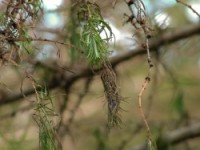 Interim measures will be put in place as a precaution, pending further surveys this autumn and next spring/summer. These are likely to include restrictions on the planting of further larch in this area and controls on the movement of larch timber from sites that may have become infected.

Phytophthora ramorum was first identified in Great Britain back in 2002 and has since affected many plants. It began to affect Japanese larch, a commercial conifer, in 2009 in the south west of England and has was first found on a small area of larch trees on the Craignish peninsula in late 2010 and then on Mull in summer 2011.

Measures to deal with this plant disease depend on early detection and rapid action to kill the infected plants/trees and any host plants/trees near them. Biosecurity measures are also put in place to further reduce the risk of disease transmission.