Largs Bowling Club is home to one of the largest greens in the west of Scotland, comfortably able to accommodate eight rinks in either direction. In charge of the day-to-day upkeep is Greenkeeper Ron Hempseed, who can be found watering, brushing and mowing the green six mornings a week. This job has been made all the more pleasurable after the club purchased a Cub Cadet 22" INFINICUT® from MTD Specialty Turf Products in April this year, making them one of the first bowls clubs in Scotland to have one. 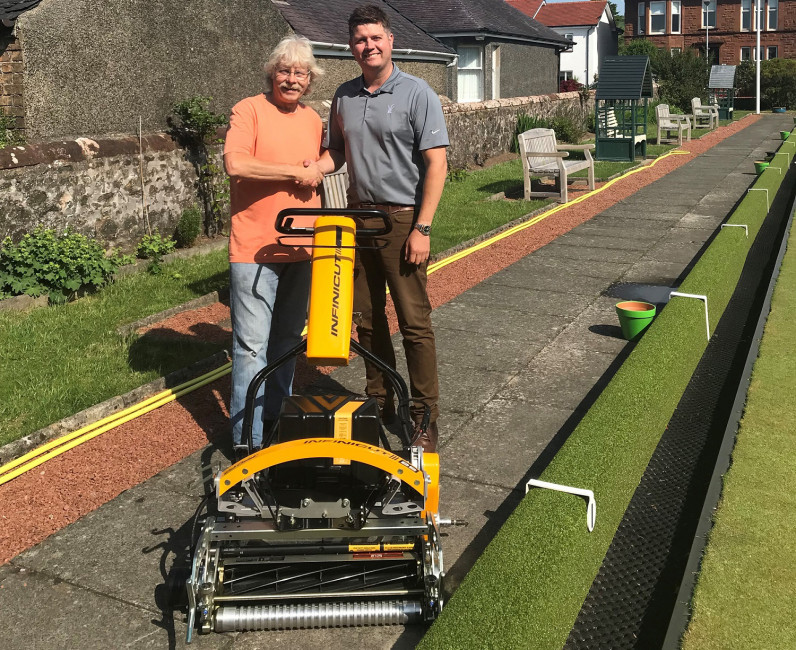 "Our previous mower was in need of a new cylinder and when we went out to price this up we decided it would be better to invest our money in a new machine" explained Ron, who has been a member of Largs BC for over 30 years. "As a committee we looked at a straight replacement of our previous mower, and because it was different we investigated the Cub Cadet INFINICUT®."

They first heard about the INFINICUT® through contractors Pro-Turfcare who work alongside Ron, conducting the more complex monthly maintenance. "They were in the process of purchasing one and suggested we speak to MTD's Dougie Archibald to come in and give us a demonstration. The Club President, Vice President and members of the committee all attended and were able to ask plenty of questions. The fact it had a floating head, removing the need for a separate groomer attachment, was a big plus point for us - as was the fact it is battery powered, keeping noise down to a minimum for our neighbours."

"We sat down and went through all the facts and figures before deciding the INFINICUT® was the way to go. The committee felt it very much reflected the direction in which the industry is moving, the next generation of electric mowing, and wanted to invest this way rather than in the same technology which has been in operation for decades."

With regular play, including morning rinks, the green takes a pounding from play but the Cub Cadet INFINICUT® is delivering a quality of cut that has not gone unnoticed by players and visitors alike. "We've had so many comments on how the green is both looking and playing, including from Pro-Turfcare who see a variety of different surfaces in a day. It's been a cracking machine so far, backed up with great support from Dougie and Jonty the technician - we're very impressed!"