0 Lashing down at Eversholt! 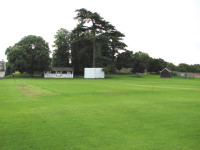 Eversholt Cricket Club are on a roll. They got through to the latter stages of the National Village Knockout tournament and recently appeared on Sky TV's Cricket AM. With the all star Lashings team also paying them a visit this summer Groundsman Kevin Nichol had his work cut out.

I have had a long association with Eversholt Cricket Club, some 39 years to be precise. I was born and brought up in the village so it was probably a natural progression to find myself playing cricket for the club when I was young. As the years went by I soon found myself playing for the first team and then, eventually, helping out with maintaining the grounds under the guidance of Bob Lawrence the previous Head Groundsman who, after 45 years service to the club, passed the responsibility of the grounds on to me in 2005.

My son Daniel (19) now plays for Eversholt so I have another good reason to provide good wickets ensuring they are safe and consistent. I learned a lot from Bob. In the eleven years we worked together he taught me the rudiments of cricket groundsmanship. In fact, Bob still likes to keep involved, often spending a few hours a week mowing and maintaining the outfield.

The formation of the club took place in the 1930s when the ground consisted of a field in which sheep and cows grazed; they were removed the morning of a game! The square today is still in the same position as then. However, I'm not sure when loam was first applied to the square but I remember it was changed to a Boughton Loam in the late 1970s

With Boughton Loam I find that cricket wickets seem to recover very quickly and they continue to give me that true even bounce that most batsman like to see. We are regularly getting scores of between 300-500 runs on our pitches. It just means the bowlers have to bend their backs and work hard to get results.
It is not unusual for me to be spending at least 45 hours a week maintaining the square and outfield. Finding enough time seems to be increasingly harder these days, especially now that I am working for Synergy Products Ltd., a specialist groundscare company in the industry. 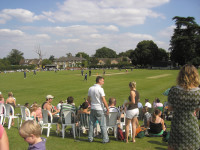 However, there are many benefits for the club in that I am able, on occasions, to utilise some of the company's specialist machinery on the ground. We regularly spike the outfield and, during the winter months, get as much spiking as we can on the square.

The square is relatively small, only having twelve pitches, of which two are designated for the juniors. The club has over 200 playing members running two senior sides and five junior/youth teams. To help accommodate all the fixtures we have at the ground, I need to try and play at least four games on each track. However, this year, at the time of writing, we have lost twelve games due to the awful weather we have been having. In fact, nearly every game was cancelled in June. It also did not help that we had a problem with last year's end of season renovations, which ended up with the club not being able to get any loam for the square, as there was a misunderstanding with the contractor who was meant to carry out the work. Basically, we were only able to scarify and overseed last year.

I was determined to reassess our feeding programme, especially after witnessing a poor growing cycle in the summer of 2006. I took the opportunity to get Rigby Taylor's advice and organise a series of soil samples to be taken and find out what was going on, or not as the case may be, in the soil profile.
Based on the report we were able to draw up a fertiliser programme to meet the needs of the sward.

Based on the results a treatment programme was drawn up:

I eventually persuaded the committee to undertake the programme and, so far, the results have been excellent.
To help keep thatch to a minimum I verticut and scarify the pitches on a fortnightly basis throughout the growing season and especially when preparing wickets.

I operate a seven day wicket prep for each match beginning with the reduction in mowing heights. The first cut is down to 2/3 mm, power brushed, cut again then rolled,. On the second day I cut and water (if needed). This process is repeated over four days then the wicket is left to dry out by cutting and rolling bringing the moisture to the top. On the morning of a match I do a final cut and roll and mark out. We have a reasonable selection of machinery that includes a Ransomes Triple, an Allett C20 with scarifier, verticutter and brushreel, a Ransomes 24-inch, an Australian mower for wickets,

a Bomag heavy roller and a pedestrian medium roller.


At present we do not have any covers at all. I am trying to convince the club committee to buy some in the future. They are essential for cricket pitch maintenance. We would not have lost so many games this year if we had had some to protect the square.

We also have some drainage problems to solve at the ground. We are forever getting flooded from water flowing onto our ground from adjacent land, primarily from Woburn Park, especially when the flood gates are released on their lake.

So again, I will be looking at ways and means to fund a programme of land drainage improvements at the club in the coming years. Meanwhile, it will be a case of increasing the frequency of aeration operations at the ground to help keep it free draining.

This season has been even more of a challenge because of the heavy rainfall. Being under pressure to play games at all age groups, and having the whole of June washed out, I took drastic measures and aerated the square to relieve the surface water and began re-rolling as and when conditions allowed. Touch wood this action has so far not affected the way that the wickets have played.

The club is on a roll with the first team playing in the latter stages of the National Village Cup with the winners having the chance to play at Lord's in the Final.
Also, the club hosted a Lashings World Eleven side on August 1st which included West Indians Gordon Greenidge and Tino Best, Australian Greg Blewett and Sri Lankan Mavan Atapattu.

To ensure the match was not lost we borrowed some covers and sheets from a neighbouring cricket club to give us every chance of playing. As it turned out the weather on the day was fantastic - a complete surprise to everyone concerned!

As for this year's renovations, we do have some saddles on the ends of the square that need addressing, but that will only happen if we can secure some additional funds from other sources. The club do well to find the £4,000 they need for the current annual maintenance budgets.

As the saying goes you reap what you sow; the success of renovations generally indicates how the square will perform the following year. So, hopefully, we shall get organised and ensure the loams are ordered in advance and arrive early to ensure we can renovate during favourable weather conditions at the end of this year's playing season.

There is still a lot of work to be done to impress our future visitors with what is known (when it's dry) as one of the best batting squares in the county.

Lashings batted first reaching 349, which included a typically hard-hitting 157, containing 15 sixes, from Chris Cairns. Other contributions came from Rashid Latif (62) and Marvan Atapattu (34). Eversholt battled hard and scored a very respectable 277 with all their bastmen, bar one, reaching respectable double figures. Kevin's son Daniel scored 34. So the visitors ran out winners by 72 runs.

Over 1,700 people watched the game and £12,000 was taken on day. The final total is yet to be announced but the club expects to beat its target of £3,000. The money raised will be spent on ground equipment and youth development.

The club received many compliments about the pitch and Lashings management said the event was the best organised this year. The day of the match was the club chairman, Peter Garratt's 50th anniversary with the club. His brother Colin is Club President. The event was a surprise for them to mark their anniversary. Peter said that the whole day had been perfect - the weather, the atmosphere and the match and everyone associated with the club is delighted.
www.lashings.com for more information.

Eversholt's appearance on Sky TV's Cricket AM was certainly one of the noisiest and also pretty unsuccessful when it came to bowling against the clock in the 'Car Park Challenge'.!