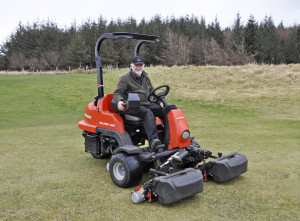 Donegal Golf Club, situated on the rolling dunes of the Murvagh peninsula in the northwest of Ireland, has seen significant improvements to its putting surfaces and significant savings in fuel bills since purchasing a Jacobsen Eclipse 322 hybrid greens mower from Ransomes Jacobsen dealer, Kevin Broderick Ltd.

Links Superintendent John Gallagher has worked at the members' club for 33 years and manages a team of five greenkeeping staff. Commenting on the Eclipse 322 he said,

"We always use Jacobsen mowers on our greens; in my opinion their quality of cut is second to none. We've chosen to have the recently introduced 15-blade reel in the cutting units, which gives us a maximum of 1,230 cuts per metre, if required.

Being able to lock in the cuts per metre is another benefit as it means that all the greens are cut to exactly the same criteria. I've increased the height of cut from 3.2mm to 4mm without any adverse effect on speed and might even get it up to 5mm later in the season.

"We were the first club in Donegal to get an Eclipse and more have followed; the fuel savings are impressive and, personally, I think it's the best mower for greens as the quality of cut is close to perfect."

Donegal Golf Club was founded in 1959 when the first golf course and clubhouse were built at Tullycullion on the edge of Donegal Town. In the early 1970's some members identified the links land of the Murvagh Penninsula as being suitable for a golf course and the land was subsequently leased from the government.