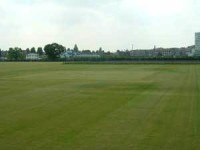 Covering some 3.5 hectares this re-build project involves the reconstruction of the entire sportsfield to create new natural turf pitches and a multi-use artificial pitch.

New drainage and irrigation systems form a vital part of this project. "A gravel raft has been installed over the entire area, 100 mm deep," says Nigel Wyatt, contracts director, "and this was then blinded with a 50mm layer of an approved sand." Some 10,000 tonnes of sandy loam topsoil has been imported and placed over the blinding layer to a depth of 200mm. Seeding took place immediately after reinstatement to give the grass time to grow-in and produce a good rooting system before being brought into play. Under the design/project management of the STRI the area for natural turf pitches has been re-graded to specific falls, to accommodate football and rugby.
"Situated away from the school, this site is fully enclosed by roads and buildings," says Nigel.

Wood Lane is on one side of the site, DuCane Road on another, with Hammersmith Hospital and Burlington Danes School marking the other boundaries.
Up-grading at the school, which currently has 960 pupils, coincides with the introduction of girls at the 11 plus age range - currently girls are only admitted to the sixth form.

Watering effectively," For the irrigation system we are using the latest Rain Bird Site Control," says Nigel. "This has been developed from golf technology and now adapted to suit sports grounds applications. It is the only system that is sport specific." The new system at the school incorporates a weather station, which calculates the evapo-transpiration rate (ET) of the plants. This helps to make the irrigation system more economical and effective. The system is fed off the mains adjacent to Wood Lane into a meter. Abbott has installed an underground tank where the water is stored and inside that is a submersible pumping station. All controls are located inside the maintenance building/groundsman's house. "By using a weather station savings of up to 20 per cent can be achieved," says Nigel.
"Stations are able to measure rainfall, air temperature, wind speed, and direction, relative humidity, solar radiation and leaf wetness. "It then uses this information to calculate the ET value. The water lost by evapo-transpiration can then be replaced to help keep the grass plants healthy."

MJ Abbott has been awarded a maintenance contract to look after the pitches through until September 2004 when they will be handed over for play.