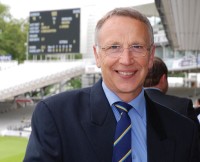 FIFA has announced that Pitchcare's Laurence Gale is to become editor of their new magazine 'Play Fair' which is due for launch in the Autumn.

The magazine, which will focus on grass roots football across the world, is seen as the perfect vehicle for Mr. Gale's editorial experience.

FIFA President, Sepp Blatter, is said to be behind the appointment having admired the content of the Pitchcare magazine since its launch in 2005. He said: "The sterling work that Pitchcare and, in particular, Laurence Gale has done for groundsmanship at all levels is to be admired. I was particularly impressed with quality of the work in the Pitchcare magazine."

A former head groundsman at Fratton Park, the home of Premiership club Portsmouth, Mr Gale is said to be delighted with his new role. He takes up his new position on June 1st. In a statement he said; "I have divoted the last seven ears to Pitchcare, and have throughly enjoyed my time working with a grate team. But, I feel the time is now write to take up a new challenge."