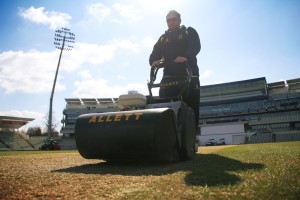 The first cricket match that took place at Edgbaston Stadium ground, Birmingham was on the 7th June 1896 when Warwickshire played MCC watched by a crowd of 3000 over two days.

In August of the same year six thousand people turned out to see Warwickshire take Australia to a draw. Today, Edgbaston is considered to be one of England's leading cricket grounds and a world leader, regarded by players as an inspirational place to play.

Living up to its reputation, and maintaining a pitch that was, of all England's test pitches, least disrupted by rain until the past two years when it has received some of the heaviest rainfall in its history, is always going to be a challenge and it's one that is met by Head Groundsman, Gary Barwell, and his team.

Edgbaston recently agreed a two-year inaugural partnership with Allett Mowers whereby Allett provides the groundstaff with six top specification cylinder mowers. Gary has been using Allett mowers since 1993 and asked about his choice he cited reliability, ease of use and realistic prices as high on his list. "We are maintaining international standards for world-class cricket and consider Allett to be the market leader in cylinder mowers, the only type of mower we believe is right to ensure the outfields and square at Edgbaston are kept up to this standard," he says.

Testimony to this is winning an award for being in the top five pitches and with a series of highly prestigious matches in 2013 the general comment and feedback is how well the ground is looking and playing.

Edgbaston has two Allett 36" Regals, two Allett 20" Shears, a Buffalo 27 and one 34 with vertical reel to complement their Allett C24 with interchangeable cartridge. Allett Mowers 01889 271503 www.allett.co.uk