0 Leamington boss thanks volunteers for pitching in 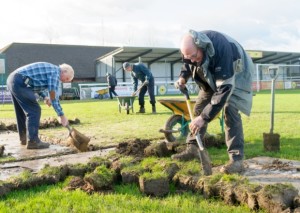 Leamington manager Paul Holleran has paid tribute to the work that has gone on behind the scenes to get the New Windmill pitch playable after the FA Trophy saga with Altrincham rumbled on for another week.

Tuesday's postponement meant the replay was rescheduled for a fourth time and drew criticism from fans of the Conference Premier side, some of whom have branded the whole saga a "shambles".

However, Holleran was quick to defend Leamington from blame, saying every effort had been made to get the tie on, including extensive remedial work on the problem area close to the Harbury Lane End.

"It's alright people throwing stones, but we've had six, seven, eight, nine, ten people there working every day on the pitch to get it right," said Holleran, who also tweeted his support to the volunteers.