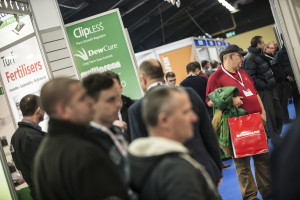 Four sold out halls, record figures for education and unrivalled networking opportunities were just some of the highlights of BTME 2015 as BIGGA announced a return to five halls for next year's exhibition.

The Continue to Learn education programme broke all records - at the last count, an initial figure of 2,900 delegates had travelled from across the UK and the world for the hugely diverse range of seminars and workshops.

A total of 4,692 visitors also attended the three days of the exhibition at the Harrogate International Centre with the halls particularly busy on the first day.

It soon became evident from speaking to exhibitors that the quality of visitors was higher than ever, with key decision makers from all manner of sports clubs, authorities and associations striking deals throughout the week.

Durabunker, a sustainable bunker solutions firm, booked late to secure a spot in the continually busy Hall M, and Director Rhydian Lewis said purchasing the stand space had been an excellent decision.

Rhydian said: "It's been a great year for the flow of visitors to the stand, there has been a steady stream which has allowed us to have really valuable conversations with customers and potential customers.

"Many turf managers have been here with other key decision makers from their facilities, and I've also noticed a real international flavour this year with people coming in from across the globe, which was another bonus."

David Mears, Director at Highspeed Group, added: "It's been our best show ever for business. We had a greenkeeper walk up and buy one of our tanks on the spot on the first day."

Lee Price, Employer Services Manager at Myerscough College, held a greenkeeping 'Mastermind' on their stand for delegates to test their agronomic knowledge - leading to some healthy competition!

He said: "It's been great to catch up with so many worldwide industry professionals, we have dozens of new contacts and enquiries to make - in a way the hard work starts now for us!

"BTME remains a very important week in the calendar and we're already looking forward to next year."

Andrew's entertaining and irreverent speech was preceded by a string of awards for outstanding educational achievements by BIGGA members throughout the last 12 months.

These included the award of several Continuing Professional Development diplomas. Many BIGGA members have taken advantage of the revamped CPD scheme with almost 1,000 now registered.

BIGGA CEO Jim Croxton signed a deal confirming Bayer as the latest BIGGA Partner - and the BIGGA members who are joining the first ever delegation to TPC Sawgrass met on the Stand of the programme's sponsors John Deere.

With thousands of greenkeepers in attendance, BTME is the ideal venue to launch exciting new initiatives - one of which was the Young Greenkeeper Committee.

A group of BIGGA members from across the UK met to identify what a young greenkeeper needs from the Association, with the aim of promoting turf management as a professional career.

One of the longest UK-based journeys to BTME was undertaken by Mark Jarret, a Deputy Head Greenkeeper who travelled over 300 miles from Teignmouth Golf Club in Devon.

He said: "I've been Deputy for two years and I'm aspiring to be a Head Greenkeeper one day. This has been my first year as a BIGGA member and the support has been fantastic. There are lots of learning opportunities at BTME, and the networking is brilliant."

One of the more emotional events took place in the BTME Media Centre with a memorial for Mike Beardall, former editor of The Groundsman magazine.

Dozens of his many industry friends gathered to raise a glass to the hugely popular journalist, who passed away recently.

In other news, during BIGGA's AGM a special resolution to amend the Articles of Association was unanimously approved. This will ensure the Association has a more dynamic, modern and transparent structure.


BIGGA CEO Jim Croxton said: "It's been another fantastic week and it's featured record numbers attending our Continue to Learn education programme which is at the heart of what we are trying to do.

"This year we've featured 215 excellent hours of education, the programme is going from strength to strength and this really drives quality visitors to the exhibition.

"We've had four sold out halls this year and as exhibitor demand continues to increase, BTME 2016 will feature a fifth exhibition hall. We're already focusing our minds towards next January."