by Grasscutter
in Football and Training & Education
on 27 Jun 2016 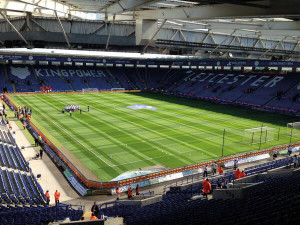 As you sit and read this latest missive, Mrs Grasscutter will be beside herself with excitement. No, nothing I've done (or am doing) but Wimbledon fortnight will be all over the television; and Mrs G can grunt and groan with the best of them.

As a humble football groundsman, I marvel at the grass in SW19 and am always amazed how it comes through the fortnight so well. One day, I really must pay a visit to one of the top venues for a behind the scenes look.

I doubt the general public will even think twice about the work that goes on behind the scenes to prepare 'grass' for Wimbledon fortnight, wonder how the stripes and patterns were achieved at Leicester City throughout the season or drool over the pristine Lord's outfield every time a Test match gets underway.

And that got me thinking - a dangerous pastime, Mrs G would say; with so much 'reality TV' now on our screens, why not a series on groundsmen and their work?

Companies such as Campey Turf Care, Dennis Sisis and, of course, Pitchcare do a fantastic job of promoting our industry, but that is generally within the ranks. What is needed is a proper documentary on the work of a groundsman - from early starts and renovations to the science of grass and those lovely stripes.

I'd even take it further and say that a series on golf courses and greenkeeping would be equally fascinating, allowing that side of our industry the opportunity to spread the word about how good the game is for people's health and, importantly, the environmental positives that golf courses provide.

Golf is unique amongst sports venues in that it very often provides large pockets of 'ruralness' amongst the urban sprawl - just type "golf in [city of your choice]" into Google Maps to understand just how many courses there are in any given major city.

I've always been a little surprised that the BBC's Countryfile programme has never (to my knowledge) ventured on to a golf course to look at the positives. If One Man and His Dog can be afforded so much of the programme's air time, then why not a peak behind the scenes at a golf course - one of the most popular participation sports in Britain?

So my thinking has now got me to the stage where I'm now convinced that even Mrs G would be more inclined to watch Real Workers of the UK rather than Real Housewives of Orange County, or some such similar tripe, which is about as far removed from reality as it gets!

And I'd even go one stage further and suggest that we groundsmen and greenkeepers could do so much more to engage the British public. My stadium, like many across the UK, is surrounded by private homes, schools and small businesses. Many of the occupants will already be fans of the club, but I doubt that many have been given the opportunity to see behind the scenes.

I've shown around the occasional party of apparently disengaged school pupils and college students, some of whom actually 'get it' once the tour is over. It's a small step, but I wouldn't mind betting that, if clubs and their groundsmen and greenkeepers involved the general public more, we could, together, make some genuine headway into getting more recognition for our wonderful and diverse industry.

Mind you, by the time you read this, the value of my house will have dropped dramatically, my wages will have been slashed, no European produce will be on the supermarket shelves and World War III will be getting underway ... possibly!

Keep the faith, and keep cutting the grass. After all, that's all we do!