Leatherjackets are the second most widespread pest problem on golf courses in the UK and Ireland (Mann, 2003) and throughout the majority of Europe. Unfortunately, little research has been carried out into leatherjackets infesting turfgrass. Most work has been concerned with forage grass. A review of work carried out into leatherjacket problems in grassland was written by Blackshaw (1991) and has been used throughout this report. Leatherjackets are a major pest in grassland leys, lawns, golf courses, sports fields and arable crops (Anon, 1984).

Leatherjackets are the larvae of the crane fly (Tipula spp.), more commonly called the daddy-long-legs (Plate 2). There are numerous species, such as Tipula paludosa, T. oleracea, T. variipennis, T. vernalis and T. subnodicornis (Blackshaw, 1991). Only T. paludosa and T. oleracea are recognised as a pest throughout Europe and T. paludosa is cited as the pest species found in US and Canada. The lifecycle differs depending on the species. 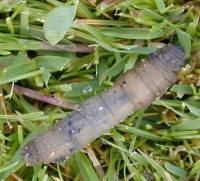 Tipula paludosa emerge as adults in August and September (Blackshaw, 1991). Females do not move far from emergence and mating occurs quickly with eggs being laid within 32 hours of emergence. Larvae enter a resting phase in the summer before pupation which may be responsible for the synchronisation of adults emerging (Blackshaw, 1991).

Tipula oleracea has two adult flight periods per year. One in August/September and a second in May/June, although adults may also be present all summer (Blackshaw, 1991). Mating takes place after the eggs have fully developed and not immediately on emergence. The females are multivoltine so egg laying is spread over a longer period than other species. They also fly much further distances and so populations do not build up in affected areas.

Up to 400 eggs are laid with 6 or less eggs being laid at one spot (Dawson, 1932). Eggs are dark brown and are laid into the soil at the base of grass stems (Drury, 1993). Eggs hatch around 14 days later and larvae start to feed (Dawson, 1932). Leatherjackets feed on roots but can often be found on the surface on damp evenings feeding on leaves (Potter, 1998). The leatherjackets are grey/brown to green/grey in colour, legless maggots with no distinct head capsule (Anon, 1984). The first stage larvae are around 0.3cm long (Dawson, 1932) growing to 1cm after approximately one month (around November in the UK) and reaching 2.5 - 4cm after the feeding period in spring (Anon, 1984). Larvae then move down the soil profile in the summer to pupate. The pupae wriggle up the soil profile with the help of backward pointing spines and push themselves partly above the surface for the adult to emerge (Anon, 1984; Potter, 1998).

Problems of leatherjackets on golf turf

Dawson (1932) lists naphthalene, Jeyes fluid and orthodichlorobenzene as leatherjacket expellants. However, naphthalene gave inconsistent results and orthodichlorobenzene temporarily discoloured the sward surface. Lead arsenate was shown to be an effective leatherjacket killer which removed the need to dispose of the expelled larvae (Dawson, 1932).

Carbaryl and chlorpyrifos are effective and are still available in some countries for insect control.

Leatherjackets, especially small ones are susceptible to drought (Anon, 1984). Therefore improving the drainage to prevent excessive moistness during the period of egg laying and hatching will help to reduce the population. Moisture shortage in September and October has been cited as the reason for reduced leatherjacket numbers in autumn (Blackshaw, 1991). However, a difference in leatherjacket numbers found between four different drainage systems could not be related to soil moisture.

The leatherjacket population have been shown to decline over the winter months. This reduction will depend on how severe the winter is. An average decline, in grassland, of 35% with a maximum of 63% has been recorded (Blackshaw, 1991).

In small areas the use of tarpaulins to encourage the leatherjackets to come to the surface has been successful (Dawson, 1932). The leatherjackets could then be swept up and removed. However, the amount of tarpaulin and man hours that would be required over a golf course would make this method prohibitive. Although, in extreme cases this may be possible on greens.

Rolling is often suggested as a method of crushing the larvae. However, there is no evidence to suggest this reduces larval numbers. Rolling during the summer months has reduced adult numbers by trapping the pupae under a soil cap (Blackshaw, 1991). This could have serious implications for other characteristics of the rootzone such as drainage rates.

Blackshaw (1991) reports little success with naturally occurring enemies of leatherjackets. Tipula Irridescent Virus has been found in a small proportion of the population. It appeared to be transmitted by cannibalism which restricted its spread. Although there was some success by introducing it through treated bran. However, in field populations the leatherjackets must encounter the bran while it is viable which may prove difficult. Wide scale production of this virus would also be difficult as it cannot be produced in vitro (Blackshaw, 1991).

A parasitic wasp (genus Anaphes) has been found in Northern Ireland that was recovered from eggs, which may prove useful in future control methods (Blackshaw, 1991). However, the wasp has not been found in other areas of the UK and may not occur in other parts of Europe or the USA.

In the UK, this nematode is currently on the market, aimed at lawn owners. We are unaware of anyone who has used this product and so do not have any information on its effectiveness.

Grass species infected with endophytes are often less susceptible to insect feeding due to their alkaloid content. Lewis & Vaughan (1997) investigated the effect of endophytes on the feeding behaviour of leatherjackets. Three perennial ryegrass varieties with and without endophyte infections were fed to leatherjackets in a laboratory experiment. There was no significant effect of endophyte infected ryegrass compared to no endophyte infection on weight, survival or number of adults that emerged. It was concluded that the levels of alkaloids may not have been sufficient enough to deter feeding by leatherjackets. The level of alkaloids produced differed depending on the endophyte/plant genotype and the season. It is possible that other grasses infected with endophytes may produce improved resistance to leatherjacket feeding.