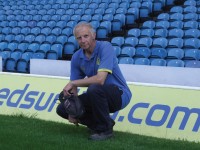 Leeds United Football Club has certainly weathered the storms - from financial difficulties in 2007 to the resulting sanctions by the Football League, putting the club 15 points adrift before they even started the season. But, showing typical northern grit, they rallied and, with promotion to the Championship for 2010/11 and nomination for the Elland Road stadium as a potential 2018 world cup venue, things are looking up.

However, for Head Groundsman Norman Southernwood, who has been at the club for twelve years, it is business as usual at Elland Road.

"All football groundsmen aim to present the best possible pitch, regardless of where their team is in the league. Even at the lower levels, the playing surfaces are maintained to the highest standards," he comments. "It's sixteen years since the drainage was renewed here, and the undersoil heating is quite old too, but it is a matter of managing any issues and producing the best possible turf for the job."

An intensive programme of end of season renovations help - with the top half inch of the surface koroed off in May by contractors Premier Pitches, and this year, new approaches were made to deal with compaction.

"There are iron pans in several areas, and my aim is to break these up and improve drainage. We tried a Gwazae deep probe aeration unit to blast air into these areas, but it didn't really work, so we then used an Earthquake decompactor, working at 8in deep, before adding limestone and seaweed granules and re-seeding," Norman explains.

Seeding was carried out on 26th May and, a month later, the sward looks healthy and is growing well - it is all that Norman can do to keep on top of it on his own while his assistant is on holiday!

"I like to cut with a rotary for the first two to three weeks. With the water and fertiliser, the new grass grows quickly, although you have to be careful not to wash all the valuable nutrients out in this dry weather." 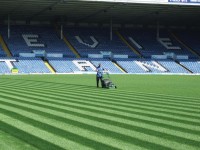 The difficulty with pitch renovations, Norman suggests, is the increasingly short closed season, particularly where clubs are involved in play-offs.

"When I started out as a groundsman at Halifax Town, the local finals were played the week after the FA Cup, which was never later than the first Saturday in May, now the season finishes later and later."

Fortunately for Norman, the prospect of pop concerts mooted for the stadium did not come off this year, although he says that the homecoming of local band, the Kaiser Chiefs, caused very few problems in 2007 as it was straight after the end of the season.

But, with the first friendly set for 31st July, there is a very tight window for establishing new seeds.

"We use Rigby Taylor R14 and, like most modern varieties, it germinates quickly and establishes well. But, it doesn't matter what you use - you can't buy time," he comments. "Fortunately, when we start playing again, the grass is still growing and, with a bit more seed put on any bare patches in September, it copes well."

He suggests that there is also a fine balance between keeping the grass cool, when the British summer excels itself, and not overwatering. "Too much water and you'll get plenty of top growth, but the roots don't establish as well. Sometimes, I like to let the grass dry out a bit."

Once Norman can get going with the cylinder mowers, either Allett Buffalo or Dennis models with a 34in cut, he is able to get on a lot quicker. He has used triple mowers in the past, but Elland Road lacks the storage space for too much large machinery.

"We are a relatively small team - as well as my assistant, there are three full time groundsmen for the stadium and the eight pitches at the training ground, so we are always busy. We retained the facilities of a top club even when relegated, but not the staffing levels."

Still, Norman says that the management are always supportive, and have never placed any budget restrictions on him, even when times were tight.

The level of support shows particularly when we are up against it," he explains. "During the bad weather we cleared snow from the pitch four times. We had the undersoil heating on but, when the temperatures are below zero in the daytime, ice still forms on the turf. The whole team pulled together and we were determined not to lose a game; before the replay against Spurs we were frantically trying to clear the pitch of falling snow and, at the last minute, it stopped!"

Such conditions take their toll on the turf, and when Norman needed extra funds to bring it back up to scratch, there was no hesitation from the management.
"We don't have a lot of machinery, but there is no limit to the amount of fertiliser and other inputs that I can use. STRI recently did a report on the condition of the turf and I have been able to follow their suggestions closely."

And, even without extreme weather, the work continues apace.

"Because of the likelihood of standing water, I verti-drain as much as possible in the season to keep on top of the drainage issues. But, you do have to be careful or you can lose a bit of grass," he explains. "The pressure is growing as we seem to have more and more matches, but it is a matter of managing the conditions in hand."

This includes liaising with the team, as shading from the West Stand, with its V-type roof, creates potential problem areas on that side of the pitch. 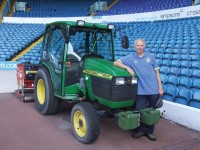 "I try to avoid warm ups on that side of the pitch, as they can cause a lot of wear. We encourage the warm ups on the east side, which gets the winter sun, but then you have to be careful that that area does not get too much wear."

The prospect of Elland Road becoming a World Cup venue is a thrilling one for any Leeds fan, and Norman suggests that such a move would bring more extensive renovations, including the renewal of the drainage into the frame.

"When the picture becomes clearer, we can schedule that in," he says. "It will take plenty of planning and, of course, money. But, in the meantime, we are happy managing what we have got and producing a pitch that is fit for the Championship."