Part 14. Pitchcare Gold is a look into old articles from the UK library. Dragged up for a second life in the Oceania website. This week we take a peak at the Leeds Rhinos and Tykes by Jason Booth. As always a Pitchcare must read!!! 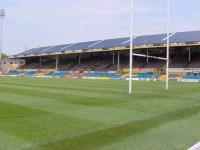 I must have one of the most unique challenges facing a stadium Groundsman. I look after a 130 year old soil based pitch that has to provide well over 60 games, and training sessions, for both codes of rugby. There is no closed season for renovations

The venue is Headingley Stadium, the home of Leeds Rhinos Rugby League and Leeds Tykes Rugby Union who play back-to-back matches on the ground during several months of the year.

Alongside, on the same site, is the other Headingley, the home of Yorkshire County Cricket Club. Both facilities are owned by Paul Caddick, a local businessman.

The Rugby League club has been based at the stadium since 1889. Rugby Union moved there in 1991 when the local Leeds club amalgamated with Roundhay and Headingley. Leeds Rhinos compete in the Tetley's Super League from March to October and the Powergen Challenge Cup from February until May.

Leeds Tykes play in the Zurich Premiership, the Powergen Cup and the Heineken cup between September and May.

Having both codes of rugby playing on the same pitch certainly tests our skills of groundmanship, especially when home fixtures are scheduled for the same weekend. The Rhinos play on Friday nights and the Tykes on Friday nights.

A typical maintenance regime for a dual match week, and weather permitting, is as follows:-


To reduce the damage from pre-match training drills, particularly ladder work, we have an improvised training area. We have an old piece of artificial grass carpet with ladders painted on. This carpet is pegged out on the pitch for the players to use. It does make a big difference. 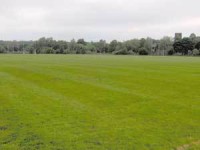 I have 3 staff who help me prepare and manage the stadium and training pitches. Ryan Golding(18) is based at the stadium, Alan Wright(48) and Dave Bromley(20) look after the training grounds, with me overseeing all operations.

I have been here at Headingley for eleven years and have been Head Groundsman for the last five. I took over from Keith Boyce who taught me many valuable lessons in the art of groundmanship management, both on and off the pitch. His assistance and guidance have helped me manage this facility and get the respect and understanding from both the management and playing sides of the two clubs.

There is a difference between the two codes of rugby, especially in their approaches to training and playing. My goal is to produce the best playing and training surfaces for them with the resources available. 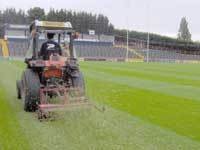 Understanding their requirements is essential. Players traction needs are very different. There's a saying about footwear for grass sports - football is played on the top of the surface, rugby League on the top and below and rugby union is always below.

I have found this to be true, we see the most wear resulting from the Tykes matches. Every ball is contested, with two and more players going into contact, resulting in several pairs of feet tying to maximize grip on the turf. The worst damage is from scrums, especially late on in the game when players are tired. Several scrums can take place on the same spot.

My biggest challenge is, without doubt, pitch renovation - when to fit some in. We do not have the time to undertake major reinstatement works such as fraise mowing or re-turfing. We are left with trying to fit in scaled down renovations, usually in July.

This year we will start on July 18th with a programme of scarifying in several directions, aerating with our own verti drain, topdressing with 60 Tonnes of Mansfield 70/30 rootzone and oversowing with Barenbrug BAR 7, which we have used now for a number of seasons. We do not use any fescue grasses because we do not get enough high soil temperatures up here in Leeds for adequate germination, and the fact that our sports will soon kick it out.

We are gradually trying to improve the pitch's ability to drain more quickly. Last year we were able to complete 1/3 of the pitch, putting in a series of sand bands at 1 metre centres, and will be completing the rest of the pitch this year.

We have decommissioned our old under soil heating system that was laid way back in the 1960's. The recent milder winters have meant we have not needed to use it, plus we have purchased a complete set of frost sheets to use if necessary. In fact, the under soil heating had caused us a few problems. It had formed a soil pan at 100mm, which, in turn, affected the drainage capabilities of the pitch. We have now broken through this pan with a programme of aeration works and the sand bands.

Our fertilizer regime consists of applying a 20-10-10 (16 bags) in late March or early April, followed up with a 6-9-6 (8 bags) in May, and then looking to put on something like a 12-0-9 plus iron (22 bags) in June, keeping the phosphate levels down as we have plenty available in our existing soil profile.

Summer also has its problems when we have cars parked on our pitch during county cricket matches. Fluid from the air conditioning systems give me the most grief, there seems to an oily residue that stains the pitch. Once the car parking is completed we de-compact, brush and fertilise to encourage the grass to recover.

Vertidraining is high on our agenda, we operate a weekly programme to keep the pitch open.

I am a great believer in the basics - feeding, aerating and mowing. I tend to vary what I do depending on the weather and based on my gut feelings. So far, it has always stood in me in good stead.

Throughout the winter playing season we maintain a cutting height of 45mm in the stadium, mowing with two 36" Mastiff mowers, presenting bands at 2.5m and 5 m widths. In the summer months I reduce the height of cut to 35mm to encourage some tillering of the sward.

It is during the periods of June and July that I want to maximise the recovery of the pitch with a combination of oversowing, watering and feeding to achieve maximum growth. Having a fully operation Rainbird watering system certainly helps me achieve these objectives.

I like having wide, bright pitch lines between 125mm and 150mm. We mark out our pitches using a specially designed spray jet The training pitches are used from 2 to 4 hrs per day, every day. We try to replicate the maintenance regime we operate at the stadium to produce a consistent surface for the players.

My aim is to continually improve the pitches at the stadium and training ground.

With regard to the stadium we still have a few problems with black layer and undulations. The installation of a fibre sand system or similar reinforced pitch system would help reduce the wear and, at the same time, give me the opportunity to restore the playing levels and improve drainage rates.

Here at Leeds I believe I have one of the most rewarding jobs in the country. The management support me 100% in most situations, and we are always looking to improve the quality of our facilities. We feel we play our part in bringing success to both the Rhinos and the Tykes.