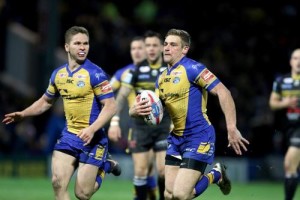 The South Stand is due to go down at the end of August to enable construction work to begin on the new stand, which adjoins Headingley Cricket Ground's North Stand.

At the end of September the venue's Main Stand will also be demolished.

Leeds Rhinos will continue to play fixtures at the ground throughout the 2018 and 2019 seasons while construction takes place.

The whole project is expected to be completed by spring 2019, with elements of the South Stand available to spectators next season.

Gary Hetherington, Leeds Rhinos chief executive, said the South Stand - first built in 1931 - had been the "heartbeat of our club for nearly a century".

"While we are excited about the future and the modern facilities we will be able to offer our supporters moving forward, we will also be taking time to reflect on the incredible memories down the years and recording them for the next generation with a number of initiatives planned over the next two months," he added.

"It will be an emotional occasion when we play our final game in front of the existing South Stand but we have a number of matches between then and now to make sure that we give it a proper send off before the demolition begins."