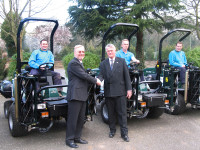 Leicester City Council has recently taken delivery of 4 Hayter LT324G LPG powered triples. The machines have been supplied by local dealer Mitchell Industries based in Coleville near Leicester and will be used for cutting verges and amenity areas in the city.

Hayter have been the first choice for Leicester for a number of years and they already use a fleet of trailed hydraulic gang mowers, triples and pedestrian machines. Leicester also has a policy of being as environmentally friendly as is practicable and when a number of triples were due to be replaced the LT324G was on the short list. With low emissions of Oxides of Nitrogen, Carbon Monoxide and Particulate Matter which cause so much damage to the atmosphere, the LPG powered vehicles are particularly suitable for areas of high population where air quality is a growing problem. After extensive trials of the machine, Leicester decided to choose the LT324G. Their decision was influenced not only by the machine's green credentials but by its performance. Hayter have fitted a commercial engine which develops an impressive 44 hp and is specifically designed for use with LPG. This has given the LT324G outstanding performance; it is quiet, smooth in operation but still has ample power to cope with the most demanding conditions.

Commenting on the choice Geoff Lake, Area Parks Manager for Leicester said. "Leicester has always made stringent efforts to minimise the impact of its activities on the environment. Our experience of using Hayter products, supported by Mitchell Industries our local dealer who has always given us support second to none, meant that the new Hayter machine had to be a strong contender to replace existing machines. Obviously the use of LPG has to be the right choice in terms of the environment but when we saw how well the machine performed the decision was an easy one for us."

For further information on Hayter products and services please phone 01279 723444 or visit www.hayter.co.uk