by External source
in Industry News, Synthetics, and Rugby
on 26 Feb 2015 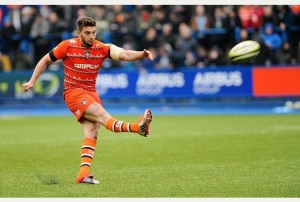 The 22-year-old Welshman ruptured his anterior cruciate ligament during the latter stages of the 43-9 victory in the LV= Cup two weeks ago.

He has had surgery to repair the injury and is set to spend between six and nine months on the sidelines.

It will never be known whether Williams would have picked up the injury on a grass surface instead of Cardiff's 3G pitch, but Cockerill admitted he is not a fan.

"The artificial pitch at Cardiff reacts differently to grass," said Cockerill. "His knee gripped sharply on the surface and he ruptured his ACL. That has been repaired now and it was purely a case of bad luck.

"I am not a fan of artificial pitches and I don't know if that was a contributory factor, but it certainly didn't help.

"Personally, I don't think plastic pitches are good for the game. The traction on them is far too great.

"A lot guys came off with burns from the pitch at Cardiff. The pitch grips very hard when it is dry. When you fall on it, it puts stress on your joints and stress on your body."

Cardiff introduced their artificial pitch in the summer of 2013 and are one of a few clubs in the UK who have gone down that route in recent years.

Saracens have a synthetic surface at Allianz Park and Newcastle have just introduced one at Kingston Park.

The benefits of a mud-free pitch during the winter months are obvious but clubs also benefit financially from having a surface that they can open to the community to earn money throughout the week.

None of the pitches at Newcastle, Saracens or Cardiff, however, are the sort of Desso surfaces used at Wembley or the Millennium Stadium, where a mixture of natural grass and artificial fibres combine to make a softer pitch with more give.

Cockerill says if clubs insist on installing a non-grass pitch, he would rather it be of the Desso variety.

"I understand clubs have moved away from grass pitches because you can see how poor they get in the winter," said Cockerill.

"But personally, and this is just my opinion, I would prefer clubs to have a Desso pitch if they want to go down that route because they are a halfway house between natural grass and an artificial surface, with millions of artificial fibres intertwined with real grass.

"They also react like grass - and that is the key bit."