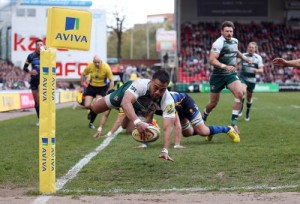 Leicester City Council has offered the club preferred bidder status for the 1.7 acre plot on the adjacent Granby Hall site. When the council marketed the land it generated five expressions of interest, which was whittled down to a shortlist of three.

The proposal from the 10-time Premiership champions includes a five-story hotel, conference facilities, shops and cafes, and "high quality" public open space in front of the stadium.

Terms are still to be agreed and any sale will depend on planning consent being granted.

"Sport has played a significant part in putting Leicester on the map and this development can only help to enhance the city's sporting profile," said Tigers chief executive Simon Cohen.

"It will offer improved public space, help attract new investment into the city and enhance the facilities on offer around the Welford Road stadium," he added.

If the move is ratified, the development is expected to provide the Tigers with a steady source of non-matchday revenues and follows Premiership rival Wasps' moves to rebalance income away from matchday tickets and merchandise.

Wasps moved to the Ricoh Arena in Coventry in November 2014 and has benefitted from its conference centre, casino and concert-hosting opportunities. The club is currently exploring the possibility of building new facilities to strengthen its financial position further.