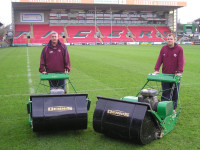 Leicester Tigers RFC have established themselves as one of the top Rugby Union teams. They are strong contenders for the Guinness Premiership this season, so it is perhaps fitting that two Dennis Premier mowers are proving essential items in the Club's machinery fleet.

Head Groundsman Steve Packwood bought his first Premier a year ago, after having borrowed one when the Welford Road pitch had been re-laid. "We had been using a ride-on machine, but we didn't want to mow with anything too heavy on the new turf," says Steve, who has been at Leicester Tigers for 16 years.
"The Premier is just perfect. Its lightweight footprint also enables it to perform well in wet conditions, and it provides a cleaner cut than other mowers we have tried."

Although the Dennis Premier is a speedy performer, the Club bought a second machine at the end of 2006 so that Steve and his assistant, Tom Hoegger can use them together and mow the pitch in record time.

The Dennis Premier 36" is the only mower of its size on the market to run on diesel. Powered by an electric start Kubota diesel engine low running costs are easy to achieve - using red diesel makes it 80% cheaper on fuel compared to a petrol engine.

Leicester Tigers' two Premiers were supplied through local Dennis dealers Mitchell Industries of Coalville. Steve Packwood reports that both Mitchells and Dennis staff have been very helpful in ensuring the machines perform perfectly.

With the Club riding high and a top quality pitch to play on, it will take a lot to catch the Tigers this season.