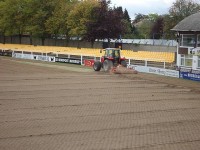 Leicestershire CCC have announced that the whole of their outfield is to be reseeded this winter following complaints by players about its unevenness. The initial plan was to give the existing outfield a revamp but, when local contractors Hewitt Sportsturf were bought in, it was decided a brand new outfield was the best solution.

John Hewitt, Managing Director of Hewitt Sportsturf, said "It is clear there has been a gradual deterioration of the outfield over many years. There have been years and years of scarification and general maintenance but it is in desperate need of a stir-up and full rejuvenation.

"We've ripped the entire surface up now, buried all of the turf and removed the thatch layer. The thatch layer is a layer that naturally generates over a period of time. It increases year on year and doesn't allow water to go through.

"There will now be a vigorous reseeding. We originally intended to scarify and clean but the scarification was too severe. We took a complete re-look at the whole thing and adopted a much more aggressive and devastating operation.

"The outfield will be smoother and flat; it won't deviate. We have taken all of the undulations off it - there were lots of highs and lows on the outfield. All of those have been taken care of."

As far as the timescale is concerned he said, "We're looking to start seeding on Monday or Tuesday and we're going to apply a fairly heavy nutrient on a rolling programme. The seed will germinate and the outfield will be back green within two to three weeks. It will then bed in over the winter ready for the new season."

Leicestershire Chief Executive Mike Siddall paid tribute to the firm, who have worked closely with both Leicester City and Leicester Tigers, saying, "We are extremely pleased to have Hewitt Sportsturf on board. They are a local firm who have vast experience in natural grass maintenance and we know that they will do an excellent job. We knew there was an issue with the outfield so we called in the professionals who decided that a radical rethink was necessary and a complete re-seed was the best option."

See the rest of the article on the following web site Cricket World.com