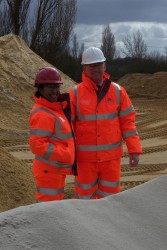 Producer of specialist silica sand products for the sports industry, Garside Sands is set to become a star following a viewer's question on the BBC 'One Show' about 'what makes the sand in Leighton Buzzard so special that it is exported overseas, to countries in the Middle East, which have an abundance of their own sand?'

The BBC programme managed to answer the question, following a visit to Aggregate Industries business, Garside Sands' Heath & Reach site, where TV presenter Angellica Bell and the crew tracked the process of a grain of Leighton Buzzard sand from excavation to washing, grading, drying, bagging and finally shipping to see what was so special.

The film will air this June on BBC1 as part of The One Show's series on towns with a 'Claim to Fame'.

Graham Turk, Operations Manager for Garside Sands, said: "Leighton Buzzard sand is special because of its high silica sand content and grain shape. This was formed over 130 million years ago when the area was a sea where the motion of the waves created the rounded grain of the sand we quarry today.

"These properties make the sand ideal for specific applications such as water filtration for drinking water to upgrade infrastructure, not just in the UK, but also in Middle Eastern countries and beyond. Leighton Buzzard sand is therefore a very specialist type of sand, of which there is limited availability in the UK and overseas."

Liz Brown, Garside Sands' Marketing Manager said: "It was an interesting and educational day. My thanks go to our team who worked very hard and diligently to prepare the site for its five minutes of fame, and especially to the members of the team who are set to star in the film when it airs on June 6 on BBC1."

The One Show crew visited the Leighton Buzzard Narrow Gauge Railway which was used to transport sand between the quarries and the main-line railway in the town. Now the only surviving line of its type in England, it is a popular tourist attraction, as well as a nationally accredited working museum operated by volunteers.

One of the jewels of the working museum collection was brought out especially for the occasion - an armour-plated locomotive of a type built for the supply lines of the First World War trenches, and then used on the sand trains in Leighton Buzzard for over 30 years. On long-term loan from the National Railway Museum, it recreated history by hauling a train of loaded sand wagons through the open countryside, for the cameras. Presenter Angelica Bell helped to hold up traffic at the Vandyke Road level crossing, under strict supervision and later interviewed the Railway's Chairman, Mervyn Leah, while the train was on the move.

To find out what makes Leighton Buzzard sand so special, watch the BBC One Show on June 6 at 1900.