0 Leighton Park in the Snow

In the week leading up to Christmas, Leighton Park experienced around 300mm of snow. Many staff including myself were snowed in for a couple of days.

Luckily, several live within walking distance of the school and were able to walk in to start clearing roads for the staff and pupils to arrive. As the continuing chaos with the snow was causing roads around the country to be left ungritted; it became increasingly difficult for people to travel, leaving the school with no choice but to close, along with many others around the country.

As Leighton Park is home to around 160 boarders as well as House Staff and residents we needed to keep as much of the Park as clear as possible. We mainly concentrated on entrances and emergency exits as well as the route to the dining hall and the main entrances to the school itself.

The school has entrance exams at the beginning of the year for the coming September intake so one of the main priorities was to clear a route in and out of the school to enable prospective students to arrive and take the exam, as some come in from all over the world. This involved creating a snow plough in an A-Team style from 40mm box section and an old ramp (see picture).

This was fixed to the loading bucket of the TC27 and proved itself to be an invaluable tool. By the end of a couple of days we had created a one way route into and out of the school which was kept clear by the use of, at first rock salt, then industrial water softener as road salt became harder to get hold of. As the exam was to be held on a Saturday we needed to make sure that the roads were as clear as possible as only a couple of caretakers work the weekends.

Due to the freezing conditions, we were unable to do essential work to the sports pitches; mainly converting a rugby pitch over to football, which involves reducing the height of cut from 70mm to around 40mm as well as making the pitch out and changing the goal posts.

The rugby posts that are due to come out have been frozen in place for several days due to the ingress of water at the bottom of the posts.

There is also winter maintenance on the 11 strip cricket square which we have been unable to complete, but we hope that with the freezing conditions, many fungal infections we have with the damp conditions we usually have won't be a problem as we prefer to use as little chemical as possible. It may be that the road edges will have less in the way of weeds during the summer as the salt put down could hinder their growth.

The volume of snow meant that we had several braches come down around the park. We have a large amount of veteran trees which require special attention. Some branches came down due to the weight of snow on them, such as the Blue Ceder, and others through the freezing conditions (see attached pictures) luckily these weren't across paths or roads to hinder us even more.

Staff
There are currently four members of the grounds team. They are: 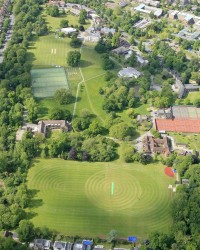 Outstanding academic achievement and pastoral care are supported by the school's distinctive ethos, based upon Quaker values. Young people are part of a forward-looking, busy and active community that gives them an exceptional and enriching preparation for life, one where they have time: time to learn and to grow; time to understand themselves, their worth as individuals and the worth of others.

The beautiful park, within which the school is set, provides a surprising oasis of calm just minutes from the centre of Reading. Here is an ideal environment in which young people can live and breathe; study and learn, grow and mature.