1 Lely UK Limited announce the death of one of its employees, Simon Gale. 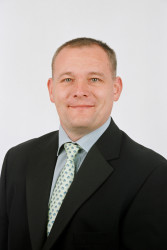 Simon, 40, passed away in November following a short battle with cancer. He is survived by his wife, Helen, whom he married shortly before his untimely death.

Having successfully carved out a career in the turf machinery market since graduating from Evesham College in the mid-80s, Simon was a familiar industry face and will be missed by many, from his colleagues and customers at Lely to those at Ransomes Jacobsen where he spent much of his career.

Simon joined Lely in 2007 as the turf machinery distributor's Toro key accounts product specialist, where he soon established himself as a popular and much relied upon member of the team. As well as providing hands-on servicing and parts support to customers, he was also responsible for training operators and mechanics, imparting his considerable skills and expertise to a plethora of industry peers.

Service and training manager Ian Sumpter says that Simon will be fondly remembered by the company. "The relationships Simon built up with his colleagues and key accounts such as St Andrews and Crown Golf is testament to his skills as a mechanic and easy-going character. We'll particularly miss pulling his leg about his trademark rigger boots! He was a pleasure to work with and remained upbeat to the last - our thoughts are with his family and friends at this difficult time."

Prior to joining Lely, Simon spent the lion's share of his career at Ransomes and some of its key dealerships. He joined New Holland main dealer PA Turney as a Ransomes machinery apprentice in 1986 and went full-time in the workshop upon qualification, earning himself a reputation as an efficient and hard-working member of the team.

October 1990 saw him leave to take up the post of head mechanic with one of Turney's major customers, Hewison Brothers, where he was responsible for the maintenance, repair and overhaul of the company's extensive machinery fleet. Three years later he joined Ransomes dealer ET Breakwell Limited, working as a field technician at the firm's Shalstone workshop in Buckinghamshire.

Following the acquisition of Ransomes by Textron in 1998, Simon became a technician/demonstrator at the company's new direct dealership branch in Redditch, aiding the development of the new business. When the Redditch operation was sold to TH White Limited - another Ransomes main dealer - in late 2003, Simon remained with the business before eventually moving to Lely in his sales support role.

Ransomes Jacobsen's sales director Alan Prickett, who had known and worked with Simon for some 21 years, concludes: "Simon was a good friend and colleague with whom I spent many years working in various roles. He was always optimistic and had a positive and ambitious attitude to life, making his loss at such an early age even more tragic. He leaves behind a great many friends within Ransomes Jacobsen and the industry as a whole."