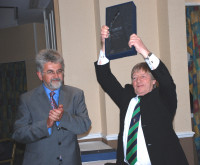 Len began his career as a greenkeeper at Radyr Golf Club before migrating to groundmanship at Penylan Bowling and Lawn Tennis Club. He then joined the Polytechnic of Wales (now the University of Glamorgan), Cardiff Athletic Club, Cardiff City Football Club and for the past 20 years has been Head Groundsman at Glamorgan County Cricket Club. Since leaving Glamorgan he has been appointed Regional Advisor for Wales by the Institute of Groundsmanship where he is responsible for developing training, education and membership in the area as well as forging strong links with governing bodies, colleges and local authorities.

The presentation ceremony was co-hosted by the ECB's Pitches Consultant Chris Wood and Head of Operations Alan Fordham. Eddie Seaward, Head Groundsman at The All England Tennis & Croquet Club (Wimbledon) presented the awards and commendation certificates. The overall winner of the ECB Groundsman of the Year was Bill Gordon of the Brit Oval, the sixth time in succession that he has won the prestigious award.