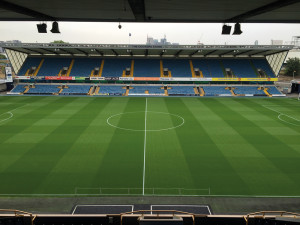 Riding high at the top end of the League One table, Millwall Football Club aka 'The Lions', have been at their current ground for twenty three years. Deputy Groundsman Steve Chalk, explains to Kerry Haywood about all aspects of stadium management.

Millwall began life on the Isle of Dogs in 1886 and inhabited four different grounds in the club's first 25 years. In 1910, Millwall crossed the river to South London, moving to Cold Blow Lane in New Cross. The fifth ground was called The Den, built at a cost of £10,000 by noted football ground architect Archibald Leitch. Millwall remained there for 83 years, until 1993 when they moved to their sixth and current ground, which was first known as The New Den but now called simply The Den. The ground has an all-seated capacity of just over 20,000 and, Deputy Groundsman Steve Chalk talks us through life at The Den. 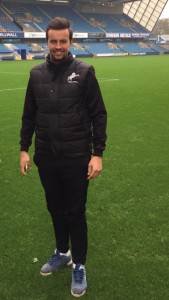 Steve has been at the club for five and half years and was originally brought into the industry by his cousin, John Ledwidge, Head Groundsman at Leicester City Football Club. After asking lots of questions about the industry, Steve was sold very quickly and applied for every club closest to home before being snapped up by Millwall.

Steve said: "I must thank my cousin John because coming into an Industry completely blind can be quite hard and I've been lucky enough to have someone there to pick their brains - which I have done many times. Along with college, networking with other groundsman is very important because it's good to get different ideas which I can then pass on to the other lads."

Steve completed his Level 2 & 3 in Sports Turf at Hadlow College, and now works with a team of six groundstaff. He is based full time at the stadium with only one other; Charlie Burrage (20 years of age), who has been at the club for two years. A daily plan is in place and the two of them adopt a 'let's just get on with it' attitude which means all hands on deck. Five further staff are based at the training ground , and an additional five part-time staff are on hand for match days.

Leading up to a Saturday game, preparation on the fibre sand profile starts on a Monday morning with a good brush to stand the grass up. Monday to Wednesday cutting is done using a 19 inch Honda HRX 476 QX, before switching to the Dennis G860 on Thursday through to match days, to avoid compacting the pitch too much. In the summer, a typical cutting height of 24mm is maintained and in winter that increases to 27mm. 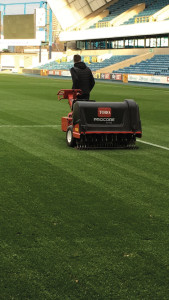 On match days, the team double cut and mark out using a traditional string method, then prepare the goals etc. After a game, there will be a full divoting session for about three hours, followed by a recovery spray and then the lighting rigs set into place.

Aeration is carried out, using a Toro ProCore, whenever there is a fourteen day gap, followed by a feed and then leave it to rest as much as possible.

Steve said: "Every week is completely different depending on fixtures and the time of year etc. and we have to adapt everything to suit. From March through to September, we feed the stadium every other week, with eight bags of 12-0-9 or 14-0-7. The winter regime (September to February) changes to 7-0-14 or 4-0-14 and then we also base feed every eight weeks with 25-5-10 or 26-5-8, as well as spraying with our bio stimulants."

At the end of the season, contractors are employed to Koro the ground before adding fibre sand if required, then they power harrow, seed, verti-drain, laser level and finally apply the grow sheet.

All four corners of the 8500m2 stadium are open, which means air flow is not an issue, however the west wing suffers from shade, which is where the SGL lighting rigs come into place and prove invaluable. In total, there are 4 x MU50s, 1 x MU360 which is also aided by undersoil heating, drainage and covers. The lights are used all the time from September through to February and usually removed on a Thursday afternoon before a Saturday game.

Steve commented: "If we know we are expecting heavy rain, we will aerate a week beforehand and turn on the under soil heating if frost and/or snow is scheduled." 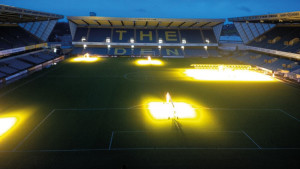 "Once a month, we take a total of fifteen soil samples and send these off to the lab to be tested. Obviously, the results of these determine if we need to adapt the daily routines to cope with diseases etc. This can sometimes adjust our spend patterns and, whilst everything has to be signed off by the financial manager, we have a set budget to work to for the year, so this can be challenging."

Steve hasn't had any specific diseases to deal with so far this season, but is prepared for anything given the current weather conditions.
Pest control is used as and when required and, the type of pest depends on how it is treated. Steve commented: "We have the odd fox, but we put nets up and this does this the trick most of the time."

Over at the Training Ground, there are four pitches that are organised and structured by Head Groundsman Dave Bradbury-Shaw (45) and Assistant Sam Pope (28), who together set out all the daily tasks and oversee everything required from the team of three others; Sam Ranson (26), Phil Watson (32) and one part-timer. Ongoing training is offered, via college courses, to all staff members and, although they currently have no apprentices, it's something Steve places a lot of emphasis on to offer opportunities in this way.

Early each morning, the team will cut the pitch being used for training, which usually starts at around 10:30am. Once this is completed, they will brush, divot and Honda cut. The team train on two pitches every day and so it's possible to use a round robin system for training to avoid one getting more impact than the others. Monday and Tuesday they will use pitches 1 and 2, Thursday and Friday they will use 3 and 4. The team does not train on a Wednesday which gives the lads time to repair pitches 1 and 2, whilst preparing 3 and 4 for the next two days. 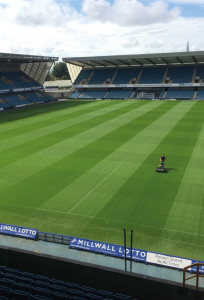 Whilst training takes place, the team usually work on the other two pitches and verti-drain, spray, feed, divot etc. The training pitches usually have local community games every weekend so the lads then need to turn them around for the 1st team on a Monday morning. Steve commented: "They work very much the same way we do at the stadium. The only difference being we have a lot more to do at the stadium and there is more pressure on appearance."

"Presentation is key at the stadium, and I consider it the most important aspect of my job. It's the showcase for thousands of people both live and on TV for match days, and that's quite a lot of pressure."

All aspects of Health and Safety are dealt with by the Stadium Manager, but all the guys are fully first aid trained and kept up to date with current legislation.

As for equipment, some is bought outright from varying companies and the remainder is on a lease. Servicing is carried out by MAB Groundscare who they have had a relationship with for many years, and trust that their turn around times are as quick as possible. Whilst they try to stay loyal to specific manufacturers, Steve shops around for the best prices, and considers the Toro ProCore to have significantly helped improve the ground. If money was no object, Steve would introduce more growlights, a Desso pitch and a new Dennis mower.