0 Let groundsmen do their jobs 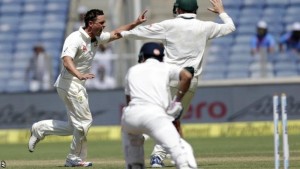 The pitch for a cricket match is best left to the men hired to tend to them. A reminder of it came from the India-Australia first Test, where the hosts' insistence upon assistance for spin spectacularly backfired.

This is not to say sides should not have home advantage. Every host prefers conditions aiding its resources. That is how the game goes. Difference between that and Pune is last-moment orders from the team management to drastically change the nature of the surface. Otherwise, no association staging a Test for the first time would offer one with turn for the new ball. It was an exaggerated version of what they wanted, a beast that became its own master and went beyond the control of its creators.

MS Dhoni's scream for a turner after winning the first Test against England in 2012, chief coach Ravi Shastri tearing into the curator on not getting one for an ODI against South Africa in 2015 and being presented with a handful of those in the ensuing Tests-these are precedents of the team putting pressure on groundsmen. These are quickly forgotten because instances of such strategies backfiring are rare. But like Bangalore in 1987 against Pakistan, Mumbai versus England in 2012, incidents like Pune underline the fact that playing and preparing pitches are specialised jobs. Too much interference proves counterproductive at times.

Persons looking after grounds and pitches in India currently are an experienced lot, with knowledge that comes with it. They know what suits the team and worked accordingly for the recent Tests against New Zealand and England, which India won without overt assistance from conditions. In all these matches barring one, spinners were at the forefront, without visiting captains complaining of excessive spin. Pitch curators were happy to work without orders and see matches go to the fifth day. The first time this season the team imposed its will upon them, it boomeranged-a lesson on who should focus on what.