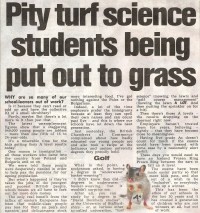 As I settle into being 'sixty something' I am aware of an increasing intolerance that, I am told, comes with advancing years. It's a condition that I have termed 'meldrewness' after the character in BBC's One Foot In The Grave comedy series. The hapless Victor took grumpiness to a whole new level and, along with the ramblings of Sir Terry and his army of TOGS on BBC Radio 2, gave us oldies something of a reference point.

I now find myself talking to the television, especially during Question Time, as I marvel at some of the tripe spouted out by politicians. I may also be seen shaking my head whilst reading much of today's modern journalism - onlookers must think I have some sort of wasting disease!

In truth, I don't read many of today's papers, not because I am an online addict, but because much of the content is pure fantasy; some may even say, lies. If I do buy a paper, it is usually the 'Thunderer' at the weekend, because it gives me enough reading material to last the week, and because I might stumble across an article by Jeremy Clarkson, a man after my own heart. I admire his writing style, although I'm no longer a fan of Top Gear, as it has less and less to do with testing cars and more about the three presenters' style over content ... sorry, slipped into meldrewness for a moment there!

So, what is wrong with the modern world? Youth of today, school exams being too easy, the banks, riots in inner cities, recession ... in truth, we have been there before, sadly too many times. Don't politicians ever learn? Oops, off again!

I grew up in the sixties, a time of prosperity when you could leave a job on Friday and start another the following Monday, allegedly, and everything was hunky dory. No mods and rockers terrorising the south coast resorts, no Profumo Affair, no Cuban crisis or 'pound in your pocket' back then, eh?

I struggled through the seventies of punk rockers, skinheads, the three day week, prog rock, buying my first house (£11,000), whilst cycling to work because the Vauxhall Viva I owned was as unreliable as a British Rail timetable.

Moving on. Thatcherism, miners strikes, boom and bust, negative equity, bank interest rates at 15%, inner city riots; oh, and did I mention the second boom and bust! Yes, everything was hunky dory back in the good old days.

It is often suggested, certainly in the red tops, that today's 'yoof' are uneducated, disengaged and unemployable. Is that true? Are they really more unemployable than mods, rockers, punks and skinheads? Are they really uneducated? Not if my six year old granddaughter's homework is anything to go by. Grandad struggles to keep up!

I have had the privilege of being in a number of management positions during my rather too long career, and I see little difference in the youth of the seventies to those of the teenies. Sure, they might have more gadgets and gizmos to contend with than my Dansette mono record player - which, if you turned the volume up too high, would walk across the lounge on its spindly legs - and could, if they chose, spend all day interacting with friends on social media networks. But, in truth, the modern youths' work ethic has remained little changed from those of other decades. I can certainly see that in the lads and lasses that work for Pitchcare; plus, I have owned a youth myself!

So, where is my angst directed this time? My attention was recently directed to an article that appeared in The Sun. In this particular item, titled 'Pity turf science students being put out to grass', the author reports on the sad plight of just under one million unemployed youngsters. A worthy topic if handled correctly.

However, correctness does not appear to be in this contributor's vocabulary. He or she begins the article with; "Why are so many school leavers out of work? Is it because they can't read or add up and have the collective IQ of a small shubbery?" [a rather sad attempt at Clarksonesque writing, I feel]. The author then goes on to have a swipe at Poles and Bulgarians, stating "The only real benefit from the influx of eastern Europeans has been that middle-class people pay less for their au pairs and nannies and delicatessens stock more interesting food," [note the poor punctuation] before finishing this section (aka rant) with a claim that employers prefer immigrants because at least they can spell their own names and can count past five". Good grief.

To add credence to the article, the British Chamber of Commerce is quoted as complaining about "how badly educated our young people are" and "the ludicrous and useless university degrees they proudly hold. What is the point in having a degree in underwater basket weaving?"

That is a phrase that has its origins in the States, but did the BCC really use it? I can find no reference to it.

As you might imagine, my meldrewness was nearly off the scale at this point, but the balance was finally tipped when I read; "you can study for a degree at various other so-called universities, turf science (mowing the lawn) and golf course management (mowing the lawn A LOT, and then putting the sprinklers on for a bit)".

The article ends thus: "Having five grade A's doesn't count for much if the exams could have been passed by a reasonably alert gerbil [more faux Clarkson]. This has been the ethos of our schools in the last 30 years and it has created a generation of children who are not winners at all, but out of work".

My guess is that the author of this article was probably 'educated' in the last 30 years, so he probably makes his point rather well! But, surely, irresponsible drivel like this has more to do with what is wrong with this country than the large majority of good folk who actually live in it.

How much better it would have been to investigate just what is involved in a turf science degree, rather than simply ridiculing it without knowing the facts? To offer it as a real career opportunity for today's youth. To investigate some of the other worthy career paths that are available - not just underwater basket weaving! Of course it would, but that would have involved some investigative journalism, and that's far too much like real work!

Sure, there are issues in this country - always have been and always will be - but, isn't it about time that the popular press looked for the positives in our society rather than always reporting the negatives, especially at a time when their popularity is at an all time low following the phone tapping scandal?

Far more importantly, isn't it time that the national press and broadcasters regulated themselves to becoming more responsible for the content of their publications and programmes, and returned to reporting facts rather than sensationalism and fiction? They may be pleasantly surprised by how well the 'good' folk of the UK respond.

Let's have some sanity - please!