Ask any Greenkeeper or Groundsman what you think a reps/consultants job is like and, unless they have given it a go before, chances are they would think its a pretty cruisy gig. Nice company car, fuel, expenses, good wage and travel. Phwoah yeah, that looks great, right! Sometimes if you're as lucky, as I was, you may have had the chance to travel to different parts of the world as well.

Sounds like a dream job? Well it can be if you put in the work.

There is also a down side to the job however - long hours, extended time away from home, targets to reach every month, which can lead to stress, and the travel can get tiresome. These are just a few of the negatives of the job, before we focus on these I'll walk you through the sales rep job I had.

I was lucky enough to score a job at Campey Turfcare. Campey Turf Care Systems is a highly respected grounds care machinery company in the UK; we provided specialist equipment and ideas for turf professionals. The company is one of the biggest independent turf companies in Europe, and Richard Campey is one of the most recognisable faces in the industry. 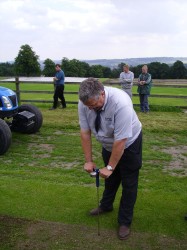 Campey Turfcare has been built on a range of sports turf renovation equipment, designed to rejuvenate worn pitches quickly and without undue reliance on man-made chemicals. Products such as Koro, Turfworks and Dakota are sold all over the world and often come from the Campey depot in Macclesfield Cheshire.

I had been travelling around the world for about 6 months before landing in the UK to start my visa. I landed in London and had to find some work. As it was December, work on turf was hard to come by. Joining an agency, I found work as a porter working in a university. The job was a little like working for the United Nations, hardly anyone spoke English and there must have been about 12 different nationalities working with me. You basically received a map of the university and a parcel then walked to the spot and delivered it.

Having a few friends in the UK that I had worked with on golf courses back in Australia, I approached them about a way to get back onto turf. They all informed me it would be pretty hard in winter, but to keep an eye on the Pitchcare website. This was my first experience with Pitchcare. Obviously I was impressed as I now wear a Pitchcare Oceania shirt, but that's another story! Long story short, I applied for a job at Campey Turfcare and was given an interview which led to the job.

It must have been a big risk for Richard Campey as I was only 22, had minimal sales experience and the only thing that stood out would have been my experience managing a golf course, which was rare for someone my age. Getting the job was a big relief for me and a welcome chance to move from London. 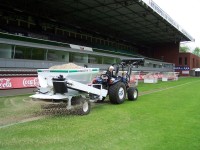 After moving up to Buxton I was working for Campey within a week and on the road. I had one week travelling around with their Sales Director, Simon Gumbrill, then was given a map and told to get at it. It's a steep learning curve, especially for an Aussie that had no idea how to get from A to B. I had an area that was allocated to me, covering the north east and midlands. The furthermost north I would go was York and south was Birmingham. In between this area I had the peak district which I lived in, the outskirts of east Manchester, Leeds, Sheffield, and Stoke. These are some pretty large cities to find your way around.

Trying to cover such a large area was difficult, it involved plenty of long hours and the day normally started at 6am to get to the first stop before 8. The last stop would normally be between 3 and 4 then there was often a 4 hour drive home from wherever I'd been. I often recall losing countless hours at a standstill on the M1 or M6. I think my record was over 3 hours with the car switched off! The hours behind the wheel would easily be the worst aspect of a travelling rep.

Part of our job was to also have a presence at IOG (Institute of Groundsmanship) and BIGGA (British and International Golf Greenkeepers Association) meetings as well as some of the smaller local organisations. These meetings would be regular and always in the evenings, often making a 12 hour day seem a luxury. Often, after a meeting, drinks would be involved and anyone who knows me also knows I find it hard to say no to a beer. So, by now, you're getting some idea about the hours involved in the job. Besides your local area some rep jobs often have the luxury of overseas travel. With Campey being a major presence all over Europe and having dealers in the USA and back in Australia, I was lucky enough to get to travel around a lot of Europe and even back to Australia. This part of the job wouldn't be to everyone's taste. Some trips lasted up to a month on the road and, if you have a family, that can be a long time away from home.

The other downside I could see for someone looking at making the switch would be sales targets. These are in place for a reason and you need to work towards achieving a monthly figure. Bottom line is you only get so much time to settle in then you need to sell something or a service. If you're working an area which hasn't seen your company and products for a while it can be a hard sell. You need to build up trust and a relationship with the club.

Whilst all the points I have mentioned might be a negative, for some they can also be a huge positive for those looking for a challenge. There's also opportunities to meet some great people you would never have the chance to otherwise, and visit some amazing golf courses and stadiums. As an Australia I also got to learn a complete different side to turf management. The UK has a better grasp on winter grasses such as poa annua, bent and rye grasses. The stadium managers that are able to keep grass alive and growing throughout the harsh UK winter whilst the turf is being pumped with the long winter of football games, are nothing short of a class act.

I must admit, as I am from a golf background, that I would often look at Groundsmen and think "Gee what a cruisy job!" Sometimes two or three guys looking after that small patch of grass. What do you do all day, play cards? I couldn't have been more wrong! It was a massive learning curve. Grass grows all year round in Australia, yes it will slow down but whack some NPK on and make sure it gets some water and bang, you get growth. That's right there's a need to water, rain is defiantly no certainty in winter. Apart from that there are still days that will reach high teens in temperature, so a good turf manager will always keep some growth going all through winter.

The attention to detail in the UK was also something else; whole pitches cut by hand, often with amazing patterns, is something that's not seen down under. Keeping grass alive and in condition to play on with snow, heavy frosts and copious amounts of rain to contend with, is a big task. It didn't take long for me to realise the huge work that needed to be done to keep the surfaces in A+ condition. One of the most rewarding aspects of working for a company like Campey, was working with the Groundsmen and Greenkeepers and introducing them to machinery that did a job like no other machine could. Building up a relationship and helping them come to grips with a new machine and new idea was very rewarding. Products like the Koro range are completely unique, along with Dakota topdressers, Imants and Raycam. We offered a completely mechanical solution to thatch problems that reduced the need for applications of chemicals.

You do miss certain aspects of running your own course or stadium, but the job has it's own rewards. As I mentioned at the beginning of the article it isn't for everyone.

All in all, for me, it was a marvellous experience getting to work on the other side of the world, seeing new countries and gaining a better understanding of turf management in a different climate. Who knows if the Queen hadn't booted me out perhaps I'd still be enjoying life drinking my warm beers and supporting my beloved Reds.