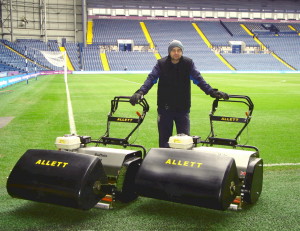 Head groundsman at The Hawthorns, Rob Lane, explained that the decision to buy Allett Buffalo 34 mowers had been driven primarily by the needs of the club's new Desso GrassMaster pitch.

Installed in summer 2011, the pitch comprises artificial fibres intertwined around natural grass to produce a stable, high quality playing surface. Re-graded and levelled prior to installation of the Desso pitch, the ground also features a new programmable 24-sprinkler irrigation system and under-soil heating.

"Our previous main pitch mower weighed around 350kg which was proving too heavy for the new Desso surface which, thanks to its construction, is capable of remaining more open and freer draining than grass on its own," he said. "By comparison, Allett's Buffalo 34 mower weighs 175kg, which is half that of its predecessor and ideal for mowing the hybrid pitch.

Just two groundstaff, Rob and his assistant, Dave Beard, are responsible for maintaining West Bromwich Albion FC's main stadium and two nearby all-weather pitches. By purchasing a pair of identical Allett Buffalo mowers, Rob says that the pitch can now be mown simultaneously by himself and his assistant, easing the pressure ahead of matches.

During the winter months, the turf is cut at a height of 27mm - 28mm, normally the day before a Premier League game. Cutting frequency averages once every 7 to 10 days between October and March, although other pitch commitments such as League and FA Cup fixtures can increase the frequency of cut. "We are aiming to maintain extremely high presentation levels for players, spectators and the TV cameras," explained Rob. "Height of cut at the start of the season is around 25mm and we rarely go any lower than that or higher than 29mm."

Apart from low weight and good balance, other features of the Buffalo 34 that impressed Rob and Dave during their two week assessment of the machine were its build quality, ease of adjustment and simple operation. "I like the fact also that the mower is not overly complicated and produces well-defined stripes which last," said Rob, who has been at West Bromwich Albion for 25 years. "Allett and Farol were extremely helpful from the start and made sure that we fully understood all aspects of the machine, its setting and operation. It's a good feeling to be buying top-class mowers designed and built by a British company located just 30 miles from the football ground where they're being used."