Protect your staff and members from lightning

LIGHTNING STRIKE, WITH ALL ITS INHERENT IMPLICATIONS, CAN COME AS 'A BOLT OUT OF THE BLUE'

Lightning may not be the first hazard confronting golfers in the UK that springs to mind but it is very easy to forget just how dangerous and potentially lethal it can be. The lightning rod effect of tall trees and people exposed in the open is well known but often overlooked when considering Health & Safety issues on a golf course. In the US The National Severe Storms Laboratory estimates that lightning kills about 100 people and seriously injures a further 500 each year. In the UK weather patterns may not be as dramatic as those in some areas of the US but the loss of only one life through a lightning strike highlights the dangers and, in this litigious age, is it not time club management looked more closely at their safety procedures to keep both players and staff safe and protect themselves against potential liability?

For many years both The R & A and the PGA European Tour have recognised lightning as a threat to players and spectators alike. As tournament organisers with considerable resources they can rely on experienced staff to decide when to suspend play and when it's safe to re-start. Most golf facilities have to rely on more basic resources, such as the club pro or secretary, to decide when conditions are such. Human observation and judgment is fine but depending entirely on golf course personnel to watch for bad weather or to interpret other available weather information is no longer acceptable and certainly unfair to those given that responsibility.

So what can you do to improve safety at your course? Firstly, investigate new and now affordable lightning detection technology and, secondly, adopt lightning safety procedures as part of the working practice. 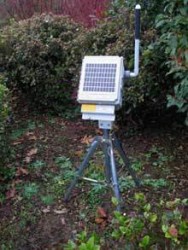 The first requirement is that people need to be warned about an approaching storm in sufficient time to seek shelter, so a system with proven reliability should be used. According to the US National Weather Service, relying on visual signs of thunderstorm development is hazardous due to the limits of human observation. These limits become obvious when threatening conditions are just outside the observer's ability to hear thunder or see storm clouds over trees, buildings or hills. Natural sight and sound senses may only extend for possibly three to four miles, which is not far enough when considering an incoming storm may be travelling at 100 miles per hour!

Much of the lightning research comes from the US and there it has been determined lightning detectors do enhance warning time during the initial storm stages and forecast the storm's arrival.

Cloud-to-ground lightning strikes have been detected as far as 10 miles from the storm's cell edge. Lightning detection equipment can pick up and report thunderstorms and lightning activity at a stage that may be outside the human observers sight and sound range, whilst Blue skies may still be directly overhead.

Some clubs in the UK have already acted to deal with this potential danger, The Wisley Golf Club has installed Hydroscape's lightning detection system that employs state-of-the art technology to address the most demanding of lightning safety and equipment protection applications. The system, under the brand name of Strike Guard, continuously monitors an area up to 30 miles distance from the golf course in all directions, looking for either cloud-to-cloud or cloud-to-ground lightning and providing lightning contact signalling at user-set activity thresholds. Patented optical signal processing and proprietary optical-coincidence technology prevent false alarms. Sensor data is communicated via lightning proof fibre optic cable to an independent lightning data receiver with system status and both visual and audible alarms. Data can also be routed to a PC, where historic information can be accumulated.

How does lightning form?

Lightning is a flow of electrical current between the earth and storm clouds, this occurs as varying charges of positive and negative polarity build up in the atmosphere during a weather storm.

The result is a discharge of negative energy called a "stepped ladder", that is sent rushing towards the earth. As this downward force nears the earths surface a positive charge or "streamer" rises up to meet it. When the two opposing charge systems meet, they create a closed circuit. As the path to "ground" is completed a flash or "return stroke" occurs.

A lightning bolt also superheats the surrounding air to a temperature as high as 50,000 degrees centigrade or 5 times hotter than the Sun.

Lightning produces the highest fatality rate of all natural disasters with 90% of strikes occurring between the months of May to September. These strikes kill over a 1,000 people annually in the United States alone and in addition severely injure a further 1,500 to 2,000 people and in recent years we have seen a number of media reports of people being either killed or injured through lightning strikes occurring in the United Kingdom.

There are 5 basic ways in which a person can be killed or injured by lightning:

1. Direct Strike - Either the victim or an object they are holding, i.e. golf club, umbrella etc. is struck directly by the bolt.

2. Side Flash - This occurs when the bolt strikes a nearby object and jumps to the victim i.e. the victim is standing under a tree, or next to a gold buggy.

3. Ground Current - Lightning strikes the ground and spreads away from the point of impact, like a pebble dropped in a pond, causing a "voltage gradient" towards the nearby victim. The voltage differential across the span of an average footstep can be lethal.

4. Secondary Burns - may occur from jewellery or clothing that is melted or set on fire by the bolt.

5. Secondary Trauma - Blunt injuries or other trauma may occur from the shockwave produced by the lightning bolt, or from the fall of items such as trees or branches, hit by the strike.

The Strike Guard system is specifically designed to address personal safety in the golf course and recreation environment.

The system comprises of, 3 components:

Is an omni directional thunderstorm sensor covering a radius of 20 miles from its location, or an area of over 1,256 miles.

The Strike Guard has 100% detection efficiency within this area and zero false alarms.

The Sensor can be located on a building rooftop or the ground using its own supplied mounting tripod.

Provides an alarm radius setting (for setting how far away a lightning strike will take place before alarms are activated).

Selectable lightning settings (for how many lightning strikes will occur and at what distance from the golf course before the alarm is activated).

The receiver is wall mountable within a stainless steel enclosure.

As you will see The Strike view Software is loaded onto a PC, which interfaces with The Strike Guard Receiver again through a fibre optic communications cable, which is plugged into the COM port of the computer using an RS232 to Fibre Optic converter.

The software provides information to allow the user to categorise lightning data, analyze storm progression and determines the time to resume operations. The software is designed to expand upon the information provided by the receiver.

The Strike Guard system can be used in a variety of ways. It can be used to provide alarms to course staff that can decide on what action to take to both suspend and restart play, or used to initiate The Strike Guard Wave Siren System, an automatic warning siren system permanently installed around the golf course (Wisley Golf Club has one of these systems).

Comprises of a transmitter and a number of sirens:

The Wave Transmitter receives notification from The Strike guard Receiver that lightning has been detected and is heading towards the golf course.

The transmitter automatically sends a secure radio signal to an unlimited number of siren stations around the course within a 3-mile radius to initiate a siren signal to warn golfers and staff to seek secure shelter.

Once the danger has passed, the transmitter sends an all-clear message to sound the sirens again with a different tone to resume play or activities.

The sound from each Wave Siren horn covers an arc of 120-degrees, which can comfortably be heard from a distance of ½ a mile from the siren station. Therefore with 3 horns linked to one station you can achieve 360-degree coverage within ½ a mile sound carry in any direction.