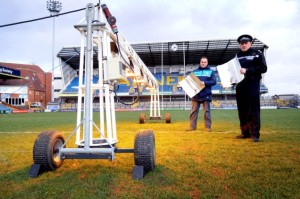 The lights were being used to grow "grass" of the criminal variety.

But now powerful lights seized from a major cannabis farm in Headingley are helping to boost the turf at Leeds Rhinos.

Police confiscated about 500 plants after raiding a house on Richmond Mount earlier this week.

They also seized growing equipment, including about 50 lights which mimic the effects of the sun.

Instead of binning them, officers handed them to the Super League club.

Rhinos officials have now set up a special lighting rig to grow grass on well-worn sections of the pitch at Headingley Carnegie Stadium.

PC Kevin Hussey, of the Leeds inner north west neighbourhood policing team, who had the idea, said: "We already have an excellent relationship with Leeds Rhinos and they have worked with us on a number of community initiatives with schools and young people over the years.

"When I found that we could donate equipment seized from cannabis farms to local groups I discussed it with their head groundsman to see how we might be able to help them out.

"Previously we would have to pay to hire skips to dispose of all the equipment but this way we can save money and see something that criminals have been using in the illegal drugs trade put to a positive use in the local community."

Rhinos' head groundsman Ryan Golding said: "We have a great relationship with the police, especially through the Leeds Rhinos Foundation and this just further grows those links. The lights will certainly be put to good use, especially at this time of year."