Founder of LodeStar music festival, Doug Durrant, had a lifelong vision of creating an event with a special atmosphere that brought people together in a beautiful place of natural surroundings. Through the help of Limagrain UK, Doug has achieved a truly stunning setting for the festival to take place. 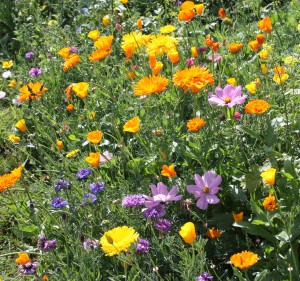 On the southern edge of the Cambridgeshire Fenland lies a quaint and picturesque village called Lode where Doug and his family have been farming since the 1930's. However, once a year it comes to life through a music festival which unites the community and brings joy to people of all ages. At this year's event festival goers were treated to sea of red poppies.

In a fitting tribute to mark the 100 year anniversary of the start of the First World War, Doug felt that Limagrain UK's WW1 Commemorative Poppy mix would provide LodeStar 2014 with a poignant and memorable display - the kind that epitomises the ethos of the festival.

The extraordinary array of vivid red flowers were created by Limagrain to serve as a powerful reminder of the great sacrifice made by British and Commonwealth people during WW1.

"I had seen photos of their poppies in a trade magazine and thought that not only did they look fantastic but the values behind the mixture were in line with those of our own. Having previously purchased Limagrain's Douce France Colour Splash mixture - which added a great splash of colour to the festival, I decided to contact them again," said Doug.

LodeStar works with many local charities and upon hearing about the festival and Doug's decision to give-away 1000 free tickets to 'Tickets for Troops', Limagrain kindly donated the flower mixture in recognition of his good work.

The iconic flower mixture, which is also available in a mixture of Red Poppy and Red Flax, has proved to be extremely popular throughout the UK with golf clubs, landscapers and local communities all purchasing them.

Having sown the flowers himself, Doug decided to use them as a stunning border on the edges of the fields: a border that would create a colourful display with a long life span - and he was delighted with the results.

"They have done a great job in bringing colour and cover to the borders of the fields while also improving the environment and habitat of the local wildlife with minimal effort.

"I also had touching comments from the public recognising why I had planted them. The poppies bloomed gloriously for the festival and way beyond and I still even have poppies in flower in late October."

Limagrain UK, one of world's largest seed companies, is at the forefront of the marketplace. With an extensive list of products available, Doug said that he would definitely be turning to the company again.

"The seed quality is high and the staff are friendly, knowledgeable and willing to help in order to provide the best solution for growers to get the results needed," he said.

Pitchcare are a distributor of the full range of Limagrain Wildflower seed mixtures, telephone 01902 440250.