After Mike Kemmett, grounds manager at Haberdashers' Aske's Boys' School in Hertfordshire, wasn't getting the desired results from his previous grass seed, he decided to look elsewhere. His research led him to Limagrain and now he believes he has finally found the perfect product 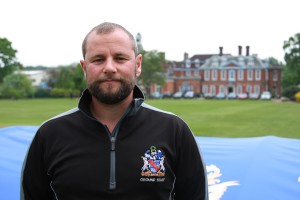 Founded in 1690, Haberdashers' is a British public school for boy's which frequently tops the academic league tables. It has been voted the best school in the country on three occasions and a large percentage of the student body goes on to study at the universities of Oxford and Cambridge.

The man tasked with keeping the sporting facilities in immaculate condition is Mike, who tends to the grounds with his 8 dedicated members of staff.

However, it could have been a very different story. Originally, Mike was on course to earn a qualification in gamekeeping and fisheries management but after Tony Blair outlawed hunting, it seemed that a career as a gamekeeper would present limited opportunities. Fortunately for Haberdashers', he decided to pursue a diploma in greenkeeping and sports turf. He then went to work at a number of prestigious establishments including Merchant Taylors' School and Harrow School before landing the grounds manager position at Haberdashers'.

That was five years ago and Mike's experience and ability is most certainly benefitting the facilities of Haberdashers'. Ever the perfectionist, Mike insists on using only the finest products and after not achieving the results he desired with his previous grass seed, he decided to conduct thorough research into making sure he had the best product on the market.

"I just wasn't getting the results I wanted - slow establishment and I didn't get the colour or the density. I had always known of Limagrain and I wanted to hear from people who had used it - so I asked around. Andy Matthews at Clifton College and Adam King from Radley College were quick to recommend Limagrain's MM60 and MM50 without hesitation.

"After purchasing some I actually conducted a trial between three leading grass seeds, one of which was MM60, just to see which one was the best. Initially you couldn't see a lot of difference, but after a while Limagrain really came into its own. I found that the MM60 would just sit on the pitch a lot more while the others would kick out more easily and lose their colour.

"The MM50, which I use on the squares, is a great product too. It stays in the surface incredibly well and withstands a lot of wear. It binds the clay together, you get great colour and you also get decent recovery. It's a pure mixture, there's not been any impurities at all and it proves that you are buying a decent product."

Mike is now in his third year of using Limagrain's MM50 and MM60 and this summer, the products put the 'icing on the cake' to some major pitch improvements at Haberdashers'. He certainly had his work cut out as he oversaw a half a million pound project to install four brand new rugby pitches and a cricket outfield, which included a new drainage system and borehole with the means to irrigate the pitches. When the project reached the point of seeding, there was only one option for Michael.

"When we sat down with the consultant, a different seed was suggested to me but I said that I wanted to stick with what I knew. I know what it can do and I'd rather have something that I know works just to complete the job. The MM range is a brand I trust and I guess it was just the comfort of knowing how well it performs.

"Within 4 or 5 days, with watering, it was up and running and was a beautiful green colour. I was impressed with the speed of which it came up and from there we just kicked on.

"Overall, I've been genuinely impressed with everything from Limagrain. The customer service is excellent and it's never a hard sell with them - in fact I'm encouraged to test it against other products which show's great confidence in the products. There's absolutely no reason at all for me to change," he said.