by Louise Challiss
in Arboriculture, Woodland Management, and Machinery & Mechanics
on 09 Jul 2021

Exclusively running GreenMech woodchippers for more than 20 years, Powerline Services (MLJ) Ltd have recently added their latest machine into the fleet - the first from the revolutionary EVO series. Their new EVO 165DT 45LE model is already delivering powerful performance for Director Ben Jones and his team since its delivery in May, offering bigger, faster throughput for the effective removal of vegetation from the utility networks in and around Herefordshire. 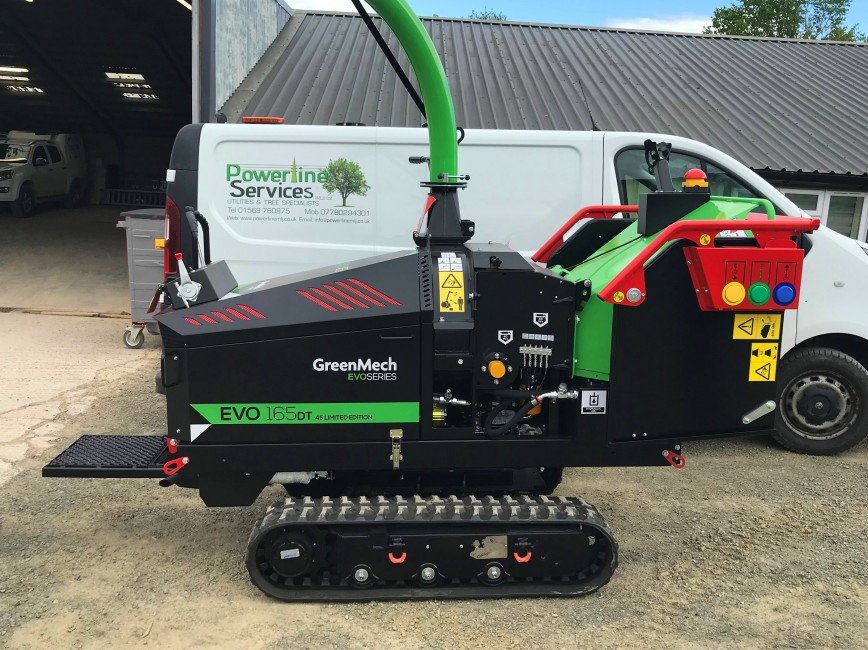 For Ben and his cutting teams "efficiency is key", and it was the desire for a bigger output chipper that saw him turn to GreenMech for his latest solution. "I wanted something capable of processing brash a bit quicker, as well as larger timber without necessarily going up to an 8" machine" he explains. "GreenMech showed us the EVO 165 with a 25hp engine, which was a seriously impressive piece of kit, but the limited-edition model featuring a 45hp Kubota diesel engine was a real added bonus."

"I like the fact the EVO runs on horizontal rollers, and the feed rollers being 'variable speed' is a great feature to have for dealing with different types of material. It also has a variable track for optimum stability on uneven ground. The guys have also commented on how the wider infeed chute has made a noticeable difference to our productivity - we have saved a whole day's work on some jobs by not having to spend time snedding brash down prior to processing."

The new EVO 165DT 45LE sits proudly on the fleet, alongside a GreenMech ArbTrak 150 which has been delivering reliable performance on a number of large power network contracts since 2018. "The ArbTrak is still out with one of our cutting teams on a daily basis - its size and 150mm chipping capacity remain fit for purpose to handle the brashy material that make up a large percentage of our projects."

"We've had tracked units since GreenMech launched their first model in 2003 as, for us, it's the most efficient way to get the chipper exactly where it needs to be." Ben concludes, "As well as coming up with great products, GreenMech are just a very good company to deal with - first class service and excellent back-up support from their dealer network. We would never use anything else."