Around 1,000 people enjoyed a special bowling day hosted by Vauxhall, part of General Motors, recently on a bowling green that had only been in existence for forty-eight hours.

The old Truman Brewery car park in London's Brick Lane was transformed, in two days, into a bowling green that not only provided a highly enjoyable free afternoon's entertainment for novice bowlers, but also satisfied the demands of Eric Pelling, Middlesex County Coach.

Built with hard wood ply timber staging, transported from Yorkshire and erected on site by Lindum Turf's Assistant Production Manager, Roger Moore, the structure was laid with over five hundred square metres of the company's LTI Greens Grassfelt that had been custom grown for the event.

Roger, who had begun work on site on the Friday morning, finishing on Saturday afternoon prior to the Sunday event, had made every effort to produce a flat, even surface to accommodate the turf. "We laser levelled the site then laid the wood from the highest point, levelling as we went. It had to be spot on," he explained.

Eric Pelling said that, when he was first approached and told that a bowling green would be coming down from Yorkshire and be laid in a couple of days, he was very sceptical. "I was pleasantly surprised on pre-visit to the event to see the green and, although I spoke to Roger about the length of grass, it proved to be the correct length for the use we gave the green on the day." 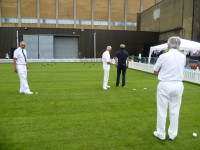 "It was great to see so many young people enjoying themselves, having had only a brief coaching session, and then getting down to bowl. For six hours the green was in constant use, with the four rinks being used by at least four people at a time on each rink. It is a tribute to Lindum that the grass was able to take this kind of wear and tear, especially as some of the delivery of the bowls was not bowled, but thrown."

Claudia Davies, speaking on behalf of Mischief PR, who organised the event with Vauxhall Motors, reported that the turf looked great. "In the past we've created both a roller skate and ice rink, so it was great to create a real bowls lawn and give our guests another new experience," she said. "The green went down really well, and it was brilliant to introduce this great British pastime to the bowlers of the future."

Lindum's MD, Stephen Fell, says that LTI Greens turf, a mixture of fescue and bent grasses, is ideal for bowling greens and, when produced as Grassfelt (grown into a felt mat made from recycled British textiles), it can successfully be laid onto any surface.

"The advantage of felt over soil in this situation means that the product is lighter, stronger and more flexible than conventional turf," Stephen explains. "It can be simply rolled up and laid down like a carpet on any surface, whether it's wood, concrete, steel or tarmac. Being soil-less it can be easily removed leaving no mess behind, making it ideal for temporary events such as this."