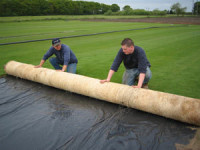 As one of four U.K. turf growers accredited to use Barenbrug's new Rhizomatous Tall Fescue (R.T.F.) cultivar in its turf products, Lindum are launching the new turf on a reinforced felt base.

Extensive trials on RTF have confirmed its excellent wear tolerance, similar to perennial ryegrass. It also has good tolerance of shade, salt and frost and can withstand waterlogging and drought due to its rooting depth capability. These results give Lindum's M.D. Stephen Fell cause to suspect that R.T.F. could well be the next possible stadium grass.

"R.T.F. is also capable of rooting to a depth of 1.5 metres," he says "which means that alongside its shade and wear tolerance is a strong resistance to drought, making it ideally suited to the South of England, where hose pipe bans are already threatened. Coupled with our reinforced felt technology, the combination of R.T.F. Grassfelt is perfect for dry, shady banks and steep inclines in a landscaping situation, or as an instant stabiliser on motorway embankments."

R.T.F. Grassfelt is available in a choice of biodegradable or non-biodegradable growing mediums, and like the original Grassfelt can be harvested to any size or shape required, eliminating the joins which result from turf harvested in conventional rolls.