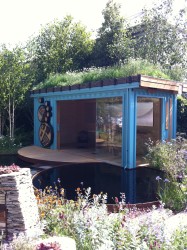 Last seen at the show in 2009 on his Silver-Gilt winning Future, Nature garden, Wildflower & Sedum Mat graced the roof of the garden studio, the main feature of Nigel's RBC New Wild Garden, which scooped another Silver-Gilt medal this year.

Billed as Chelsea's first full-size 'Rain Garden' the green roof, a mixture of wild flowers, sedum, herbs and flowering perennials grown on a biodegradable felt mat is designed to take in rain water and re-distribute it. "It's all about soaking up all the water within the garden," says Nigel. "Rain goes from the green roof to a pool, on to another pool and eventually soaks into the garden."

Developed by Dr. Dunnett, who has been working with Lindum for the past four years, the Wildflower & Sedum Mat was chosen for its potential to support wildlife in a situation that would otherwise be largely barren and sterile. "All green roofs will enhance biodiversity to a certain extent," he says "but the choice of vegetation is important in maximising its value.

We chose Lindum's Wildflower & Sedum Mat because it combines both the drought tolerant aspects of sedum with the colour and ecological benefits of wild flowers and herbs, which have a longer flowering period and will attract a wider range of birds, bees, butterflies and insects. This is the first Chelsea garden I've created in my own right and following a 10 day build-up the green roof was all in flower."

Lindum's MD Stephen Fell is delighted. "I was lucky enough to visit the show the day that the medals were announced and felt very proud to be associated with the garden," he says. "Nigel and the team from the Landscape Agency along with John Little of Green Roof Shelters and the Grass Roof Company have done a wonderful job and all are to be congratulated."

Following the Chelsea Flower Show, the RBC New Wild Garden will find a permanent home at Slimbridge, the headquarters of the Wild Fowl and Wetlands Trust.

Lindum's Wildflower Meadow Turf (a mixture of wild flowers and grasses also grown on a biodegradable felt mat) featured on the Hae-Woo-So Artisan garden which took Gold and was awarded 'Best in Category.'