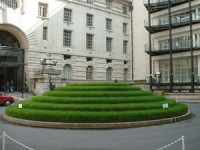 Westminster weddings could well be recorded on Lindum turf since the growers have supplied the Marriot Hotel, housed in the old GLC County Hall building.

The wedding cake structure, situated in the hotel courtyard, and designed to act as a backdrop for photographs of newlyweds has been covered in Lindum's ICON, a shade tolerant bluegrass mixture which appears to be coping well with the particular demands of this unusual location.

"The "wedding cake" is in a quadrangle and often in shade," explains David Barnes, MD of West London based Harlequin Landscapes, the company, under sub contract to Tropical Landscapes in charge of the renovation. "There's not a massive amount of air circulation as we only get the wind from one direction. We chose ICON not only for it's shade tolerant properties but also because of it's stoloniferous root growth, which produces a very tough sward with sideways growing leaves, requiring less mowing than a comparable ryegrass."

The "wedding cake", constructed when the building changed hands 7 to 8 years ago, was specifically designed to be grass covered. "The structure is polystyrene," continues Barnes "with rock-wool placed on the vertical sides and a soil based root zone used to infill."

Renovated three times in the last 7 years, with limited success, (at one time the sides were covered in strips of copper, on another occasion there was an attempt to hydro- seed, which failed), the "wedding cake" seems to be responding to this latest refurbishment.

"The turf went down at the beginning of April and so far ICON is looking good," reports Barnes, who is a horticulturist educated at Askham Bryan agricultural college in York. "I have supplied the hotel maintenance contractors with a guide giving the correct times for watering and feeding, and have every hope that the grass will continue to thrive."

For further information on Lindum's ICON, shade tolerant turf, contact the company on Tel: 01904 448675 or visit their website at: www.turf.co.uk