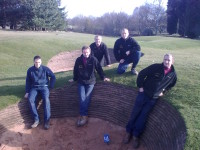 Lindum Turf will be concentrating on the three 'R's at Harrogate, Revetting, Reinforced Turf and RTF (rhizomatous tall fescue).

Suppliers to the 'fabulous bunker boys' at Doncaster Golf Club who have perfected the art of revetting, or building bunkers using the turf layering technique, Lindum has developed a method of harvesting thick turf in strips 290mm wide as opposed to the usual600mm. This saves greenstaff the time consuming task of cutting them lengthwise down the middle.

Areas of heavy wear such as walk ways on golf courses, entrances to parks and gardens, overflow car parks and football and rugby pitches are catered for by Lindum's tried and tested reinforced turf. At 40mm thick and produced by growing hard-wearing grasses in a polypropylene fibre, reinforced Loksand rootzone, Lindum's Lokturf is more than up to the job.

RTF (rhizomatous tall fescue) with its ability to root 1.5 metres down is extremely drought and shade tolerant, and because of its rhizomatous lateral growth withstands rigorous wear and tear. Hazel Firth of All Turf, Lindum's Cheshire based distributor has successfully supplied RTF Turf to numerous golf clubs in the North West for vulnerable areas at the ends of hard landscaped paths. "It's the point where golfers with their trolleys and their spiked golf shoes step onto the grass," she says. "Normally, many head greenkeepers would have to replace this turf annually but RTF has been down at some clubs for four years and is still going strong."