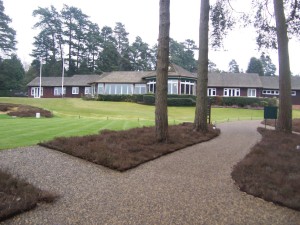 When Liphook Golf Club Course Manager, David Murdoch MG, looked out over his fabulous heathland course for ways in which to make it even better, there were very few areas in which a significant impact could be made.

There was one however. The pathways around the clubhouse and throughout the course itself could be improved upon so David set about researching the subject and visiting other golf clubs which had addressed similar issues.

David ultimately decided to install the unique Blinder Eco Path system which has been developed out of recycled rubber crumb and which can be bought in various styles and colours. The Eco Path is extremely environmentally friendly, hard wearing and, with a little bounce, very easy on the legs.

"I worked with Blinder Eco Path on the order and nothing was too much trouble, even although we were working on another project at the time and as a result the pathway spec changed while we were in negotiations. They were extremely professional and a superb company to work with," explained David. 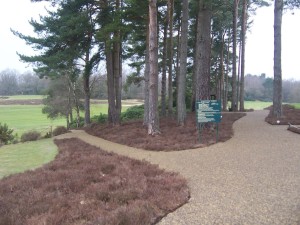 "The installations process itself was extremely impressive with Profusion Environmental completing the 400 square metre order in one day having worked solidly for 16 hours.

"The great thing is that it looks so natural and people do mistake it for woodchip in resin and, particularly where we have it going through the trees, it looks fantastic," said David, who added that his members absolutely loved the new pathways.

Penny Long, of Blinder Bunkers, said that the Eco Path had been developed alongside the successful Bunker liner concept and are proving to be equally successful.

"Everyone who sees the new Eco Paths are extremely impressed with them and it offers a solution to a problem which many golf clubs struggle with," explained Penny.

For further information on Blinder Eco Paths can be found at www.theblinder.com.