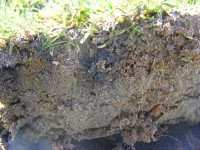 Symbio's Liquid Aeration is a new inorganic oxygen technology that allows oxygen to be sprayed into the rootzone through a standard sprayer without any physical disruption, which will help all turf professionals provide a better playing surface.

It is a complex blend of minerals and microbiology, capable of donating very high numbers of oxygen atoms right through the rootzone profile.

This has the effect of stimulating aerobic biological activity more evenly than physical aeration. The importance of maintaining aerobic conditions in the rootzone is well established. But, the firm sandy rootzones of sports surfaces have inherently low levels of available airspace, and can rapidly turn anaerobic through compaction or the waterlogging effect of rain and applied irrigation in the thatch layer and soil profile.

The obvious advantage of aerating with an evenly applied liquid is the lack of physical disruption, which will make an important contribution to revenue and golfer satisfaction with the pressure of constant competitive play.

However, there are many more advantages for the turfcare professional aiming to provide the best possible playing surface.

Physical aeration cannot get oxygen evenly into the rootzone. We are all familiar with the uneven surface caused by growth around tine holes in spring and late autumn, and the worry that the release of nutrient will spark off disease, especially if thesurface is covered in topdressing that temporarily creates the low oxygen conditions favoured by Fusarium. 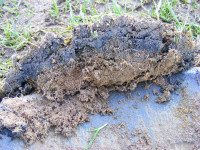 The supply of inorganic oxygen to the thatch layer, which can be extremely difficult to keep aerobic in wet conditions, significantly improves biological degradation of the thatch and reduces subsequent build up and water retention.

Thatch is a food for the fungi that perennial grasses need to thrive. Many greenkeepers experienced the misfortune, in the very wet August and September of 2008, of seeing poa annua creep back into their greens as the thatch layer built up. This is because the thatch layer became anaerobic and the beneficial fungi essential for the growth of fescue and bent died, creating the bacterial dominant soil favoured by simple annual plants such as poa annua.

Unless you can aerate frequently, with a sarrell roller or micro tines, it is often difficult to get sufficiently even aeration to develop the fungal biomass that degrades the thatch (as the case study shows). This new product will deliver oxygen throughout the thatch layer, even in wet conditions, allowing the continued degradation of thatch and survival of essential fungi to help promote fine grasses.

Most greenkeepers have experienced the root systems getting shorter as the rootzone becomes waterlogged in winter. When oxygen runs out the bacteria in the soil start to metabolise anaerobically i.e. without oxygen. Every turfmanager is familiar with blacklayer and the smell of hydrogen sulphide, the visible evidence of this process.

However, before black layer becomes evident a lot of adverse changes happen in the rootzone.

Many bacteria in the soil are similar to those in the guts of animals. In the absence of oxygen these bacteria use root exudates and thatch to produce small quantities of harmful organic acids, such as valeric acid ) which gives you the burning sensation when you vomit), acetic acid orv inegar and buteric acid, which makes milk go sour. In some instances minute quantities of alcohol are also produced.

This toxic layer often forms in the waterlogged, dead soil created above the compacted iron bands a few inches below the surface. Roots cannot penetrate this toxicl ayer until either oxygen is introduced, to recreate aerobic conditions, or the soil dries out in spring and oxygen gets into the spaces between soil particles.

Physical aeration, coring and topdressing creates a narrow channel for roots to penetrate but, by adding Liquid Aeration, oxygen is evenly distributed throughout the upper soil profile to prevent black layer and toxic acids from being formed

As well as rapidly eliminating problems such as black layer and sulphide formation, the product stimulates all the beneficial aerobic activity that occurs in the rootzone.

When grass photosynthesises it produces top growth, but an equal amount of energy in the form of proteins and carbohydrates is leaked through the root systems to feed bacteria which multiply rapidly around the root. The bacteria eat these nutrients and, when they, in turn, are eaten by other organisms, ammonium is excreted into the soil.

When added to foliar feeds the product will enhance this effect incompacted rootzones, making small quantities of nutrient last much longer as you convert free energy into organic plant food.This improves the retention and effective uptake of any added organic and inorganic nutrients, as well as stimulating the soil bacteria and fungi that encourage healthy plant growth.

Common turf diseases attack weak plants when there are not enough natural biological defence mechanisms in place to offer protection.

To further compound the problem, some pathogenic fungi such as Fusarium prefer low oxygen conditions, either because they no longer have competition from the beneficial microbes, or because they require anaerobic conditions for best growth. In both cases, anaerobic conditions select for and allow the disease-causing organisms to 'win' in the fight for plant tissues. In oxygenated soil, bacteria and fungi will recycle nutrient for healthy plant growth to produce strong plants less susceptible to disease.

Bacteria and fungi also have three ways of protecting the grass against pathogen attack.

They form a physical defensive barrier around the root system,t hey competitively exclude pathogens by eating the pathogen or the nutrient on which they feed,and some even produce toxins to kill pathogens and provide the defence mechanisms against disease.

All this activity requires oxygen. 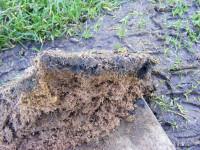 The use of chemical compounds to supply an inorganic form of oxygen to soil is not new, traditionally these products have either been biocidal - effectively sterilising the rootzone - or been very high in nitrogen based nutrients.

Liquid Aeration is neither biocidal, nor loaded with nutrients, so it may be tank mixed with almost all organic, biological or inorganic nutrients or additives. It should be noted that physical aeration is very important, especially if hollow coring is required to break though soil pans or clay to permit drainage.

For nearly all greens Liquid Aeration will provide the benefits of evenly distributed oxygen throughout the year whilst reducing the costs,disruption and loss of play associated with conventional aeration.

Problem- The greens had a thatch layer of about 3cm that would not degrade in spite of aeration with various solid tines every two - three weeks.

Blacklayer formed about 3cm below the thatch layer which was also anaerobic. Roots would not penetrate the black layer. T

he soil was also black and compacted with no viable microbial activity.

Solution - On 17th October 2008 Liquid Aeration was applied at the rate of 1 litre per hectare diluted with water at 1:400 to a selection of greens. Other greens were untreated as a control.

All greens were managed in the same way apart from the addition of the product.