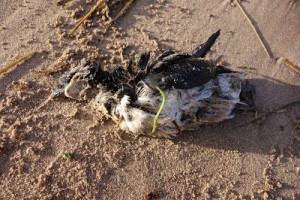 Les Rae, first assistant at Montrose Golf Links reports that Little Auks have been found dead at the course due to the inclement weather.

The wild weather that the course has suffered over the last week has taken its toll on Little Auks.

The storms coming in from the east have caused them to struggle to find food in the rough waters of the North Sea. Large numbers have been blown onto the land and, unfortunately, many have also been washed up on beaches already dead; the beach off the golf course being no exception where a large number were spotted.

Little Auks winter off the Swedish and Danish coast where they feed on plankton. In the summer they breed in the Arctic in colonies numbering hundred of thousands.

The scale of problem has ensured that the story has also been featured on the local and national news.

Image: One of a number of dead Little Auks washed up on the beach at Montrose Golf Links