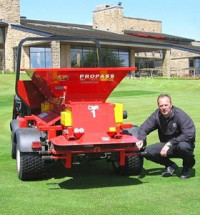 Supplied to the Newport, South Wales course in late spring by local dealer, Ted Hopkins, the two machines went to work for the first time helping to prepare Celtic Manor's Roman Road course for the 2005 Wales Open, held in the first week of June. When not being used ahead of major tournaments, their responsibilities are being divided between the resort's three 18 hole courses that will all now benefit from light, yet frequent top dressings. Application rate is put at about three tonnes of a triple-screened sand/peat mix per 18 greens.

"I'd been looking for an effective spinner-type top dresser for some time," explained Jim McKenzie, Director of Estates and Ryder Cup Course Development at The Celtic Manor Resort. "The ProPass 180 was selected primarily on the recommendation of greenkeeping colleagues who told me about its ability to spread wet or dry dressings very consistently on a little but often basis. To be quite honest, the results to date have been even better than we expected. The machine does a very good job indeed."

In action three days out of five in the build-up to the Wales Open, both ProPass 180s are mounted on Toro Workman work trucks for treating all the greens, now carried out on a weekly basis. Jim McKenzie pointed out that he would be looking to bring in a trailed version of the ProPass 180 at some future date for regular light top dressing of the fairways and greens' approaches.

"The light application of top dressings every week is part of a concerted process of steadily improving our three golf courses, helping drainage and maintaining the finer turf surfaces in peak condition," commented Jim. "Although we are currently re-modelling and upgrading our Wentwood Hills course, which will host the Ryder Cup in 2010, we are looking forward to major benefits resulting from the use of the ProPass 180 on its 18 greens when the major works are completed."

According to Jim, the ProPass 180 complements regular vibratory rolling and close mowing of the greens in helping bring superb consistency to the putting surface, producing a very true roll of the ball. "Furthermore, the ability to apply very small quantities of top dressings accurately over a wide bout width is having a beneficial effect on the condition and wear rate of the mowers' bottom blades," he concluded. "All in all, the two machines are proving highly valuable additions to our machinery fleet."