by Clive Tregarthen Mumford
in Editorial
on 17 Dec 2013

0 Living on an island or two!

The Isles of Scilly Golf Club was carved from granite outcrop and clifftop heathland, unpromising, indeed, vulnerable ingredients from a groundsmanship viewpoint.

By hand was fashioned a nine- hole links which the great Amateur champion of the early 1900s, Horace Hutchinson (who officially opened the course in 1904), described as being "among the most beautifully scenic links I have ever seen".

Maintenance was always going to be its achilles heel. It was seriously strapped for cash in its formative years. To employ an agrarian expert was beyond its purse. Membership was small, as most islanders were more accustomed to swinging a boat hook than a mashie niblick. To most, the Royal and Ancient game was an alien pursuit.

A succession of stewards valiantly doubled up as 'greenkeepers', the last-named role of the two a far from easy one. The course fairways were not conventional grass, but an amalgam of heather, gorse and thatch - whilst the thin subsoil was pure sand. An ancient gang mower, towed behind a tractor, was the only way to keep fairways tidy. It was also the only antidote to the ever present threat of rough and gorse eclipsing the fairways and returning the headland to its original overgrown form.

As for the greens, what with rabbit scrapes and the thin sandy subsoil, it was always going to be a losing battle to produce decent surfaces on which to putt and, over the years, was born a certain phlegmatic acceptance when a truly struck putt would inexplicably veer off line.

To make matters worse, in the late 1930s, the links, for a spell, became the official "airport" of the islands' eight-seater Dragon Rapides, which flew to and from the course on a daily passenger service from a clifftop airfield at Land's End. A bell would be rung when an incoming plane was imminent; anyone out on the course would discard their clubs and go to the sidelines, before surging forward to hold down the wings of the plane after it had come to a halt. This daily activity did the links no favours, even if it didn't noticeably damage them either!

It was in the Second World War that real hardship visited the links. The course was commandeered by the military who built encampments and installations and even trained hawks to intercept carrier pigeons. When hostilities were over, the military departed and golf-minded island servicemen returned to their native home, and the extent of the damage became apparent. They could hardly distinguish the course's features, so wild and overgrown were the fairways. Rough and fairway were as one, and greens were no longer recognisable as such.

It was only through the diligence and tenacity of a dedicated hard core of islanders - who wangled reparation from the War Office and did much volunteer on-course greenkeeping work - that the links, and the club itself, were saved from total extinction

Nowadays, whilst the membership remains slim, the three volunteer greenkeepers are doing a magnificent job.

Islands of granite and sand (total population 1,600 - a large mainland village size) stuck forty miles out in the wild Atlantic, prey to wind and weather, are always going to find it tough going to come up with playing surfaces of mainland quality. It's just not going to happen.

Each island has its 'sportsfield' on which are held everything from cricket and football matches, to fetes, music bashes and anything that requires some space to stage.

On St. Mary's - the 'capital' island - it is the Duchy of Cornwall/Prince Charles owned Garrison field which is leased to the school and would be the envy of many a larger community on the mainland. A gang mower from an adjacent camp site has managed to keep it in good order for the football season, whilst the cricketers who also use the ground don't have to worry; the wicket is an artificial one. Even this can be lethal.

Former Somerset and England paceman Ken Palmer once bowled a ball that took off, cleared the keeper's head by feet and went for six. "I'll kill someone at this rate," he reportedly said, before throttling back to military medium. All island cricketers are used to "rogue" bounces in the outfield.

Indeed, all island cricket grounds (the smaller ones are termed 'off-islands', and some have populations of under 100) have matting or artificial cricket wickets. It is the only way to ensure a regular and reasonably fair surface.

In the old days, players had to lug the roll of matting out to the middle by hand and laboriously hammer in the spikes to hold it in place.

On Tresco, held on lease from the Duchy of Cornwall by successive members of the Dorrien Smith family since the mid 1800s, the lovely little cricket ground near the sea at Old Grimsby is kept in nick by cricket loving gardeners from the island's world famous sub-tropical Abbey Gardens.

"They bring a rather upmarket ride-on mower to bear, courtesy Mr Dorrien Smith," said the gardens' marketing manager Alasdair More and a member of the cricket side. "And I am sure that there is no need to point out that the rabbit-scrape filler is, of course, the most important person involved in maintaining our pristine outfield." 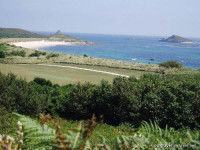 "Precious little groundsmanship is involved," said Alasdair, "although there are the odd occasions when seagull fluff and feathers need plucking from the pitch itself as they adhere to the fibres of the artificial wicket!"

On St. Agnes, the sports ground, at Priglis fringes the beach, and a well struck pull can deposit the ball there - or on the bank above it! Here, like, the other off-islands there is an artificial strip. The outfield is uniformly rough and there is no pavilion - the players gather in the shade of some tamarisk trees. This position is replicated on St. Martin's; another beautiful ground bordering the beach.