0 Living on an island 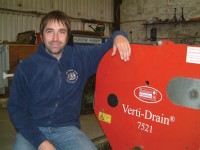 When a press release arrived in the office about a new VertiDrain 7521 for the Shetland Island Council it got us thinking "how and why?" How the hell did it get there and, surely, such a technically advanced machine could be of no benefit on a rocky outcrop in the dividing line between the Atlantic and the North Sea? Well, the former was easy to answer; by ferry. The latter enlightened us to the rugged beauty of the islands.

Shetland is where Scotland meets Scandinavia and the North Sea meets the Atlantic Ocean. Where the Shetland ponies come from; the sweaters and the Vikings. It lies 600 miles north of London and is made up of more than a hundred islands with splendid names such as Muckle Flugga, Bound Skerry, Yell and the more sedate 'Mainland' which, as its name implies, is the largest of the islands (third largest in Scotland) and home to the capital, Lerwick.

Just fifteen of the islands are inhabited and the total population is around 22,000. Its main industries have traditionally been fishing and sheep. More recently, oil has helped boost the economy. The islands boast abundant wildlife with over a million breeding seabirds, the highest density of otters in Europe, regular sightings of killer whales and superb displays of rare sub-arctic flora all within and around a quite spectacular coastline.

Helping to keep the islanders fit and healthy are an impressive range of sporting facilities which are under the management of native islander, Magnus Malcolmson, Leisure Facilites Officer for the council, a post he took up six years ago. He takes up the story.

"I manage eight full time parks staff who work across our various facilities. They consist of a parks foreman who deals with all of the day to day issues, a machine operator and six groundsmen/gardeners who carry out all the required work."

"I have responsibility for the management of five football pitches, one rugby pitch, one bowling green, one equestrian area and a 9 hole golf course. We also provide a maintenance service to ten other community run rural football pitches. As part of my work I also look after seventy-four childrens' play areas and fourteen multicourts throughout the isles." 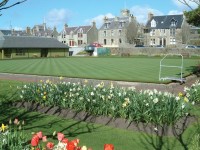 "The golf course is, perhaps, our most unusual facility. 'The Knab' is a fairly basic public facility. It's a short course, ideal really for a round of pitch and putt. There are no charges or course fees and there is no membership policy. So, it is completely free for anyone to turn up and use. The course has evolved over a number of years after the land was donated to the council by a local land owner over a century ago. In order to keep the course as a public facility, the council agreed to subsidise all maintenance and upkeep."

"As well as the maintenance of all the playing surfaces, part of my job role is looking for play areas and multi courts to develop. My Civil Engineering Degree from Glasgow Caledonian University has helped enormously. Other than that I don't have any, what you might call, 'professional' qualifications other than my hands-on experience."

So, how does machinery and supplies get onto the islands? "Obviously, where we are situated makes it more difficult, time consuming and expensive in acquiring equipment and spare parts, but the transport infrastructure (ferries and flights) to and from Shetland is very good, so it's not really a major issue. There is also a number of very good engineering companies in the islands who can undertake repairs and have the necessary contacts to help source and supply spare parts." 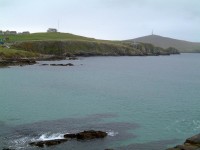 "We have a great relationship with our dealers, Garriock Bros, have supplied us with numerous items of equipment. This is a very important part of island life, to have a good relationship with people who, at the end of the day, can help you. They are a very reputable local company that don't just sell equipment, but carry out the maintenance as well. Importantly, they also know the climatic conditions. It is so wet here and very small, so nowhere is too far from the salty air of the sea."

Garriock Bros is the seventh largest company on the isles and, typical of remote companies, offer a range of services that include civil engineering, house building, plant hire, contract crushing, window manufacturing as well as machinery sales. Perhaps surprisingly, Shetland is their headquarters and they also have branches in Orkney and Edinburgh.

How is the machinery utilised - is there dedicated machinery at each site or does it all get moved around from job to job? "It's a mix of both" added Magnus. "We have dedicated equipment, such as pedestrian mowers and strimmers, at each facility plus general tractor mounted equipment which can be used on all areas. We use a fairly wide range of equpment manufacturers - Valtra and Kubota tractors, a Charterhouse VertiDrian aerator, Ransomes gang mowers, Ransomes Superbowl mowers, Sisis scarifiers and slitters, a Ryan corer and Ryan topdresser."

"The vagaries of the weather have a huge effect on our work patterns. The vast majority of outdoor sport in Shetland takes place during the summer months between April and September. Obviously, the weather during the winter is harsher (wet and windy) but the main restrictive issue is the lack of light from October onwards. In the peak of winter it could be dark from 2.30 in the afternoon, which has a dramatic effect on the length of our growing season and, also, what sports can actually take place. With the exception of our rugby pitch, we close our parks completely during the winter months. During the tail end of September we catch the last few weeks of the growing season to repair goalmouths, topdress, apply winter fertiliser etc."

And what of the VertiDrain 7521 that prompted this article? "The department had a twenty year old model, which was still giving good service. Nevertheless, we took advice from Garriock's Sales Manager, Peter Jack, to research the market. We narrowed it down to a choice of two manufacturers in the end, Charterhouse and one other, and had a demo from both companies.

Richard Heywood from Charterhouse led the demonstration. He left the operators feeling very confident in the operation of the machine, and showed how straightforward the maintenance would be. We knew the better bits of machinery to look for and believe that 'cheapness' is not always the best policy - it can end up being a case of false economy." 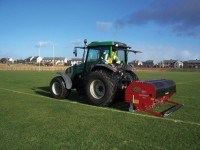 "As part of Garriock's service, to withstand the harsh conditions the 7521 would be operating in, they coated all removable parts like tines, collars and lock screws with copper grease. This ensures that, in the future, these can be easily removed and replaced if necessary without the hindrance of corrosion. They also applied Waxoyl to the whole machine, part of their 'standard practice' on any new equipment, to protect it against corrosion that the Shetland elements tend to inflict on metal machinery."

"I like to vertidrain the pitches as often as possible, even in the drier spells, to help maintain decompaction. This goes for the winter time too when it really, really has to be too wet for us not to!"

"Since being delivered in 2007 it has given outstanding service to the islands' pitches, all with varying depth and soil conditions. When you're so far away from the manufacturer it makes sense to check out the product in detail before you buy and, two years on, we have had no problems or issues."

With thanks to Pan Publicity for their input into this article 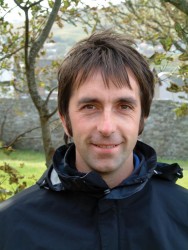 Who's your hero and why? Eric Cantona. Being a lifelong Man Utd fan it wasn't until he came along that we started winning anything decent. I loved his arrogance, chest out collar up - brilliant!

What is your dream holiday? Anywhere - could be roughing it on a hillside in Shetland or a beach holiday abroad, just as long as it's with my family.

What annoys you the most? Lazy, ungrateful or dishonest people - oh yes, and personalised number plates, usually it's really dull people who have them.

What would you change about yourself? To be 6 inches taller and have bigger feet.

Who wouldn't you like to be? Gordon Brown, oh the stress would kill me. Or Michael Jackson's doctor.

Favourite record, and why? "Half the World Away" by Oasis (theme tune to the Royle Family), I sang it at my wedding.

Who would you choose to spend a romantic evening with? My lovely wife Gwen.

If you won the lottery, what is the first thing you would do? Depending on how much I'd won, I'd sign Wayne Rooney on a season long loan deal for my local team, Dynamo Chernobyl, we need another decent striker. Nah, I do really enjoy my work but the first thing I'd do is retire.

If you were to describe yourself as a musical instrument, what would you be and why? An acoustic guitar - nice and mellow.

What's the best advice you have ever been given? From my mum. Whatever you do in life always try your best. If you've tried your hardest no-one can ask for any more from you.

What's your favourite smell? Curry! Nearest town, Lerwick, has a population of approx 7000 people but, in my opinion, we have three of the finest curry houses in the UK.

What do you do in your spare time? Spend time with my children, play football, DIY around the house, pluck away on my guitar (if I'm allowed).

What's the daftest work related question you have ever been asked? Not so much a stupid question but a stupid denial. A spokesperson for an equestrian group, who had used one of our areas for an event, tried to deny that the nearby car park wasn't entirely covered in horse manure. "That's not horse sh*t!!" he exclaimed! I think you'll find that it is and I have the photographs to prove it, was my response. The car park was spotless the next day!

What's your favourite piece of kit? Definitely our new Verti-Drain 7521 - it's been so effective since it arrived. Since we began using the machine we have had no cancellations of bookings or matches, which was normally a fairly common occurrence up here.

What three words would you use to describe yourself? Very laid back.

What talent would you like to have? Be able to play the guitar and sing like Paul Weller - you can but dream!

What makes you angry? I don't usually get angry, but rabbits in my garden eating my trees - that almost tips me over.

What law/legislation would you like to see introduced? Cyclists should be banned from using all main roads between the hours of 8.00am and 8.00pm. Tourists just shouldn't be allowed on bikes full stop!