0 Living the good life in Tuscany In Italy, there are over 180 golf clubs ranging from 9 hole to 36 hole facilities, plus an additional fifty-nine driving ranges. This year, the number of golfers who signed up to the Italian Golf Federation, (FIG) has increased thanks to the success of top professional golfers such as the Molinari Brothers and the young Matteo Manassero, who are receiving accolades and awards internationally.

However, the number of golfers could be even higher if there was an infrastructure in place designed to promote the sport in a more accessible way, especially in the current economic climate, to open up the world of golf to both juniors and all of those who wish to play, but cannot afford paying the exorbitant sums.

I have been in greenkeeping for about seven years, ever since I graduated from the University of Pisa in Urban Area Management and Landscaping. My degree thesis was on the comparison between Richmond Public Golf Course (UK) and Versilia Golf Club (ITA).

After graduating, I specialised in oliviculture and, recently, graduated from the Italian Golf Federation programme as a superintendent.
As far as job experience, I have been a seasonal greenkeeper at Richmond Public Golf Course (UK), Versilia Golf Club (IT) and The Grove Golf Club (UK). The latter turned into a full time greenkeeping position once the season was over. I returned to Italy in 2009 to be part of the construction of Golf Club Toscana Resort Castelfalfi as Assistant Project Manager. Currently, I am Assistant Head Greenkeeper here at Castelfalfi. In 2011, I was also a volunteer at Killen Castle Golf Club (IR) for the Solheim Cup. 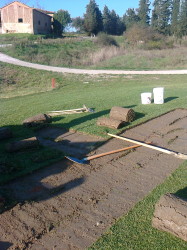 Castelfalfi used to be an 18-hole golf facility. After its complete restoration and expansion, Castelfalfi is the only 27-hole golf course in Tuscany, covering 360 acres within a 2,710-acre estate. Wilfried Moroder and Rainer Preissman were the course architects.

We began construction in May 2009, opening the first 18 holes to the public in August 2010. Construction of the last 9 holes was concluded that same autumn, with the opening set for autumn 2011. The courses are very undulating and blend perfectly into the typical Tuscan landscape.

The soil profile of the greens follows the FLL system, therefore, being built without gravel layer. We placed pipes of 80mm diameter, according to the fishbone draining system. The same method was used for tees. Topsoil on the fairways is native and is mainly clay. We installed a decoder irrigation system managed by Nimbus II software.

Castelfalfi Golf Club is a membership course, with about forty members at the moment, most of whom play every day during the high season. My duties include paperwork, such as programmes, scheduling and organising the workload with the Head Greenkeeper, plus working both as a spraying technician and irrigation technician. For major mechanic failures, we have the support of an external mechanic.

We employ nine crew members; a Head Greenkeeper, two assistants and six greenkeepers. We have a consultant from Germany who visits us a few times a year, to supports us for every single problem.

We don't have an agronomy plan. Our Head Greenkeeper, together with our employer, decides what to do during the season, just checking the status of the turf every week. 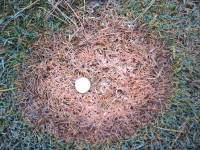 nce opening, just over two years ago, the only procedures we have carried out are several verticuts and topdressing on greens, and a few localised verticuts and topdressing on tee boxes. Unfortunately, we don't have any soil laboratory analysis carried out, so we put down fertilisers when we think the grass needs it. We use foliar (on the greens), granular and organic fertilisers, the latter just before the winter.

We spray herbicides on fairways and tees when broadleaved weeds come out, with dicamba, 2,4 D, and mecocrop as active ingredients, but we don't spray against the main types of fine turf that we have, such as Bermuda Grass (Cynodon dactylon), Annual meadow Grass (Poa annua), Knotgrass (Paspalum distichum) and Common Crabgrass (Digitaria sanguinalis). 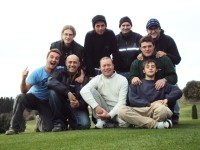 We do a curative control against Fusarium (Microdochium nivale), Dollar Spot (Sclerotinia homeocarpa), Brown Patch (Rhizoctonia cerealis) and Red Thread (Laetisaria fuciformis); for these diseases we use prochloraz, propiconazole, tebuconazole and propamocarb as active ingredients.

Against the main insects, such as Cranefly (Tipula oleracea) and Summer Chafer (Amphimallon solstitiale), we used to apply clorpirifos as an active ingredient, but it has recently been banned, so we are seeking an alternative.

Sometimes, wild boars appear on our turf and, when that happens, they can do a lot of damage. To control them, we have installed an electric fence.

I keep records of irrigation water and carry out chemical analysis of conductibility and pH. I also keep records of temperature and rainfall, which are important to know when to irrigate. The irrigation is probably the most important part of our job, especially in Italy where the season is represented by dry summers. Our grasses require about 32mm/week on greens and tees, 25mm/week on fairways. We keep an eye on thatch levels by eye. 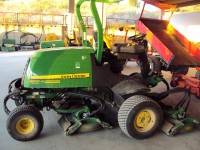