by Football Foundation
in Synthetics and Football
on 02 Jun 2018 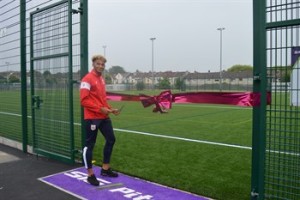 Lloyd Kelly, former City Academy pupil and current Bristol City FC player, returned to his old school to officially unveil its upgraded all-weather pitch recently. The facility was made possible thanks to investment from the Premier League & The FA Facilities Fund, which is delivered by the Football Foundation.

The grant enabled the school to replace an existing third generation (3G) artificial grass pitch (AGP) with a brand new all-weather surface. Due to the school's current lack of grass pitches, the original facility was heavily used. Having been installed back in 2003, it was no longer fit for purpose as a result.

Now, the Academy's pupils will benefit from a state-of-the-art new surface, which will support different formats of the game. These are set to include veteran and disability provision for the area, with a number of local grassroots sports organisations set to take advantage of the upgraded facility.

The original all-weather pitch was already serving as a hub site for the Gloucestershire FA's referee and coaching programmes - something that will now be better supported by City Academy's improved playing surface. The school's partner clubs Bristol Central YFC and Bristol Inner City YFC, as well as the first LGBT club set up in the area, Bristol Panthers FC, will also use the new facility.

City Academy were awarded a £332,370 grant from the Premier League & The FA Facilities Fund towards the project. The school worked alongside the Football Foundation and the Gloucestershire FA to compile a five-year Football Development Plan, which is a vision of how sport will be played on site with an emphasis on increasing participation.

It is hoped that a total of 15 new teams will be established across the school's two partner clubs, Bristol Central YFC and Inner City YFC. These will be focussed in the junior section, with a 54% rise in Under-14 football participation predicted on-site as a result. In addition, thanks to female clubs such as Easton Cowgirls FC set to use the upgraded surface, a 215% boost in girls' participation in the game is also expected.